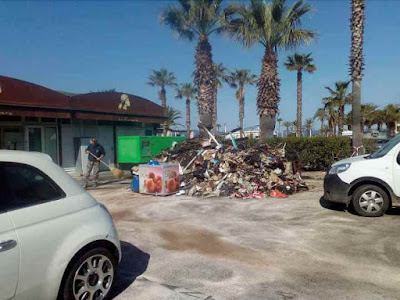 John was tired of his job as a sweeper. The heat, the all-pervading smell of waste and the smell of his own sweat made him want to puke. He had taken up this job two weeks back. Nancy, his wife had been hell-bent on his going to work. He was also tired of Nancy’s constant yelling. So, when Nancy saw this advertisement for a sweeper’s job and insisted he apply for it, he had no choice but to oblige. Otherwise, she would ration his drink every day. John could not think of a life without alcohol.
Well, it had been two weeks and today he was free to junk this dratted job. Away from the dirt, the smelly pieces of plastic wrappers and from the dirty left-overs from people’s plates. It had taken a bit of nerve, but he had finally managed to screw up his courage to kick this job and be a free man again. He had bludgeoned Nancy that morning, chopped her body into tiny pieces and dumped them into the middle of the dirt heap that he had just gathered. It would soon be carted away to the corporation dump. Ah! the sweet smell of freedom!
No of words: 200
Photo Credits: C.E Ayr
Author’s Note: This post has been written in response to the Sunday Photo Fiction Prompt hosted by Susan. Find the other entries here.
JaiOctober 17, 2018May 9, 2019

One Thought to “The Sweet Smell Of Freedom – Sunday Photo Fiction”