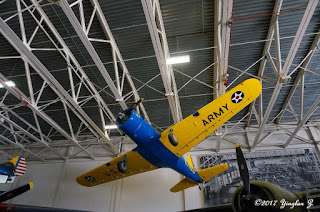 Air Commodore Stephen Hayworth pushed the joystick down in a desperate bid to climb down and avoid hitting the ceiling which rushed up at him. With a deft maneuver, he pulled down, barely saving his aircraft. That morning he had been separated from his fleet of planes and found himself flying inside a remote warehouse. A huge warehouse.
What was worse, he did not seem to have good control over his aircraft. His bomber seemed to have a will of its own. Must be lack of practice, thought Stephen to himself. Stephen had not expected this. After being commissioned out of the air force he had spent his time among planes on the ground. But deep inside Stephen was happy that he was again getting the chance to do what he did best.
Down on the ground, eight-year-old Jack pressed the buttons on the remote control of his new toy airplane and yelled in glee ‘Whoopee! She flies so high and so fast. What a great birthday present dad!’ His father smiled fondly at him.
Number of words: 175
Photo Credits: Yinglan
JaiMay 15, 2018May 9, 2019