Skip to content
Unemployment
When you receive a pink slip… 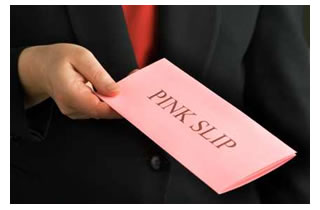 As soon as I decided to write on this topic, I did a little research in order find out how the term “pink slip” originated. The Wikipedia article on this term tells me that it most probably originated in Vaudeville.  It seems the authorities in the United Booking Office used to issue notifications for the cancellation of theatrical acts in a pink sheet of paper. Wikipedia also tells me that official documents including termination papers were always done in triplicate and one of the copies was always in pink paper. The term “pink slip” has now become synonymous with a person getting terminated by his or her organization.

I for one, feel that the terminology is rather inappropriate. I rather like the color pink. It cannot be called the best of colors but it is definitely one of the better ones. My daughter loves pink. The more apt color to issue termination papers, I would have felt, would be a muddy brown. For that is the color one’s life gets splashed with with when a person receives the pink slip.

Moving on from colors to the effects of a pink slip on a person’s life, I assure you it is devastating. I have personally been issued the pink slip just once in my life. This happened very early in my career when I was just a novice and a first time employee. I am not going to talk about the reasons for the termination, as obviously, I would be tempted to give a colored and one-sided view of it. I will just talk about the day it happened and what effect it had on me.

I was called in by HR on the eleventh month of my first job and told that my performance was not up to the mark and that I was being terminated. When I heard this from the HR manager’s mouth, with a sudden jerk I realized that I was now among the millions of jobless awaras of our country. Of course, the words used by the HR manager were sugar-coated as I had a very good relationship with him and he sounded most apologetic. He also promised to give me a good recommendation  letter.

I was simply devastated. I tried to stall them, but they had made up their minds and I finally signed the papers, took my cheque for a month’s salary and departed. I came home and reported to my parents and I am thankful to say that they did not chastise me. My mother made me drink a glass of iced lassi and talked to me for half an hour and told me not to worry. Fortunately at that time, I was a bachelor. I was also not one of those young men whose parents and siblings depend on them for their bread and butter.

I knew how difficult it was to find a new job when you are not already employed somewhere. Employers look suspiciously at you and in every interview you are asked a whole lot of prying questions. Six months after the termination and after umpteen interviews I finally landed a new job.

The effect the termination had on me was very psychological and it made me slightly paranoid. In the new office I was fidgety and constantly worried about hurting people’s feelings and tried very hard to avoid trouble. It had an extremely frightening effect on my psyche. After that experience I am happy to state that there has never been a repeat and I have been on a steady career path.

Let us now discuss the question: is it fair to terminate employees? The answer is yes and no. After all companies do business to make a profit and not for charity. When an employee’s performance is persistently poor, then the organization has no option but to terminate him. After a company does its best and gives an employee every opportunity to come good, if he still fails, termination is fair enough.

But what I object to is the process organizations refer to as right-sizing. Terminating employees suddenly and in huge numbers when the organization is just facing a small crunch is very unfair. Sometimes people who have been faithful employees for decades are suddenly told to leave one fine morning. People usually take loans from banks, buy cars and build houses thinking their jobs are secure. When an organization suddenly cuts off  someone’s life support, the effect is devastating.

I have read that sometimes entire families take the drastic step of committing suicide because they do not want to face the shame and the incumbent financial difficulties. Everything gets affected. Your car and home get auctioned. You don’t have the resources to pay your child’s school fee. The outlook becomes very dismal. No wonder people take drastic steps.

Some organizations are not even sympathetic enough to give a good certificate of some kind when they fire someone. I mean, if you are kicking a person out, the least you can do is to make it soft on him. They give certificates stating that the employee has been terminated for poor performance. I ask you!

The result is, you can’t put the experience you had in that company on your resume. When future employers look at a gap in the career graph they straight away refuse to employ you unless you are a glib talker and a consummate liar. Organizations that give certificates of this kind usually say  that they are highly professional and cannot lie about things. They say they cannot put untruths in people’s experience certificates.

The question I would like to ask them is: “are you really doing business without telling any lies at all?”. Do you sell your products telling people every fact about it? Obviously when you market your stuff you mention only the strong points and conveniently omit the defects. So what is the harm in just giving a decent certificate? In the name of professionalism you are doing incalculable harm to people’s lives.

With President Trump following a protectionist policy  in the US the outsourcing industry is again facing a crunch. Pink, sorry muddy brown slips are beginning to show up everywhere. Already we are short of jobs for freshers. On top of that, if employed people also start losing jobs, I am afraid the outlook is very bleak. There is some talk of forming an IT employees union but I guess that is not going to lead anywhere. I do not want to sound like a prophet of doom but we really need to do something to improve the state of affairs. Otherwise the outlook is very bleak.

2 Thoughts to “When you receive a pink slip…”