Skip to content
Patriotism And Nationalism
Obsessive Nationalism: Is It Healthy? 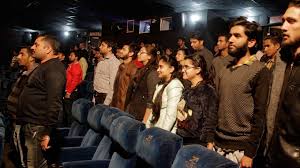 A couple of years ago the supreme court of India made it compulsory for all cinema halls to play the national anthem at the beginning of each show and also decreed that the audience has to stand up respectfully when it is played. This move came under severe criticism from several quarters. But there was no questioning it and no one dared to defy it since the order came from the highest court in the land. The few people who put up a resistance were shown their place.

Since then a bevy of steps have been taken to instill a sense of nationalistic pride in Indians. Singing Vande Mataram, the national song of India has been made compulsory in schools in some states. Recently in Rajasthan inmates of hostels were told that they would have to sing the national anthem at 7 AM in the morning every day.
Some steps go so far as to identify Hinduism with being Indian  and in many states morning exercises such as Surya Namaskar and Yoga have been made compulsory in all government schools. Of course, I am not claiming that Surya Namaskar and Yoga are Hindu. Physical exercises obviously cannot be classified as the property of any particular religion. Another thing is the benefits of yoga and Surya Namaskar are many and a large number of Indians practice it and there is nothing wrong with that.
But what I object to is making it compulsory in institutions. Suppose we were to suddenly bring in a rule stating that all children should come to school in the morning and do workouts in the gym for one hour every day what does that sound like? Making yoga and Surya Namaskar compulsory is something similar to this. There is nothing wrong in making yoga or Surya Namaskar a part of the curriculum which a student can pursue if he is interested in it. But to say, the child has to do it is imposing your ideas on unwilling people.
Recently there was a PIL filed against the earlier order of the supreme court regarding playing the national anthem in cinema halls and many judges in the panel looking into the issue clearly disapproved of the idea. One judge even remarked that there is no need for people to wear patriotism on their sleeves. He further went on to say that people visit cinema halls for wholesome entertainment and it spoils everything if people are told what to do in a place where they are trying to unwind. Finally the court left it to the government to decide.
One thing I fail to understand is what is all this in aid of? Why this sudden emergence of an obsessive passion for one’s country? Is it something that should be encouraged? Let us look at the difference between patriotism and nationalism. Patriotism is love for one’s country. When a person says he loves his country he is being patriotic. The minute you convert this love to a form of obsessive blinding passion and say my country is superior to all the other countries in the world then you are treading into a very dangerous area called nationalism.
To feel a sense of patriotism and love for one’s country is healthy. But to encourage obsessive nationalism creates problems. Obsessive passion for anything is dangerous. It leads to unhealthy consequences. We should love our country but to decry others as inferior to us just because we are born in our country is nothing short of foolhardiness.
I am all for patriotism. Yes our children should be taught about our glorious past. They should feel attached to the country and we should encourage them to be proud of being Indians. They should be taught to hold their heads high and bring laurels to the country. But let us refrain from making them obsessive and fanatical in their love for their country. Only if we Indians are able to look at our country with an impartial eye will we be able to understand our problems as a nation and provide solutions for them.
JaiDecember 16, 2017May 9, 2019