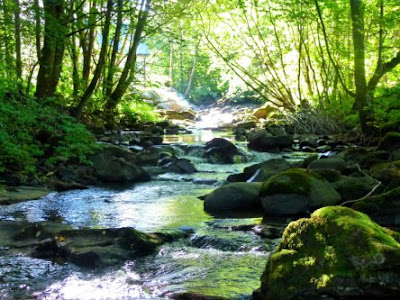 I moved from rock to rock carefully signalling my twelve-year-old son Derrick to follow me. The rocks were covered with green slippery moss. I did not want either of us to slip and fall into the water. I was a single father living with my son Derrick in the house just a little distance away from the stream. My wife Mary had suddenly disappeared a year ago. The police had never been able to discover where Mary had gone. They had checked in hotels all over the city and had enquired from all the people she was associated with.
But they had never found her. I was really heartbroken. And my son Derrick had been inconsolable. He missed his mother so badly. I had done my best to take care of Derrick. The little clearing in the middle of the greenery which we had just left was the place where Derrick and Mary used to camp on vacations. So Derrick and I made it a point to visit the place frequently now. Derrick used to go and stand on a particular spot everytime we visited the place staring at the ground. I was worried about Derrick.
Was he remembering his mother too often? I was trying to be both a father and a mother to him. I had often told him ‘Derrick, I am both your daddy and mummy now. Never forget that.’ He had nodded his head solemnly every time I said that. Once Derrick had made his way to the spot in the middle of the night by himself. I had to rush to the place and bring him back. What was the matter with Derrick? Should I take him to a psychiatrist? Why was he so forlorn?
Am I succeeding in filling the void left in his life by Mary’s disappearance? I needed to try harder. Soon we made our way across to our villa. There was a police jeep standing outside the gates. I was suddenly wondering if the police had any news about Mary. Suddenly inspector Radisson Clark stepped out of the jeep and said, ‘Mr John Barclay, you are under arrest for the murder of your wife Mary Barclay. You have the right to keep silent and you have the right to a lawyer. Anything you say may be used against you.’
Suddenly I sighed as I realized I had been right in my suspicion that Derrick had seen me kill Mary and take her to that spot and bury her. And the police had somehow managed to get it out of him. Well, what could I do? I loved Mary so much and she had to go and have this affair with that fellow who had visited us last year. I simply could not help doing what I did. I looked at Inspector Clark and asked him just in order to be sure, ‘How did you find out?’
‘Your son Derrick told us when we approached him through the proper channels. He will be the prime witness in your trial.’ Inspector Radisson said. ‘We had to be very careful to talk to him without your knowledge but he told us what he knew finally. He hates you for it. And we also discovered her bones from the spot from which you are coming just now.’
I looked at inspector Radisson and said, ‘I just need one assurance from you, inspector Radisson. Promise me that my son will be placed in the hands of kind people in a good foster home.’
‘I promise,’ said inspector Radisson.

Authors Note: This piece has been written in response to Sue Vincent’s Thursday Photo Prompt #writephoto
JaiNovember 27, 2018May 9, 2019

4 Thoughts to “The Witness – Hidden #writephoto”