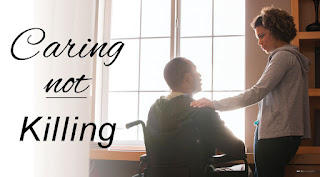 The reason I am writing this article is because of a discussion I had in office with a very close personal friend and colleague of mine. We were working late a few days back and we stepped out for a cup of coffee in the evening. My friend’s mother was in the last stages of a terminal illness and was bedridden.

I do not know how we happened to hit upon the topic but we discussed euthanasia and I held staunchly that it is not morally justified to assist someone to die. My friend felt that when a person is not even aware of what is going on around him or her and is perhaps going through immense torture, maybe it is not such a bad idea after all. First of all my apologies to my friend for arguing with him about a topic like this on a day when he must have been under immense mental agony.

As regards euthanasia, I have always been under the impression that it is illegal the world over until I recently came across a headline in the television that it had been made legal in some country. I fail to remember the name of the country but hearing this news led me to search in google for countries where euthanasia is legal. Imagine my surprise when I found that euthanasia is legal in several countries though there are strict rules regarding the circumstances under which euthanasia may be administered.

Well this made me rethink my staunch and rigid moral posture over euthanasia. My wife who has seen her parents suffer immensely is a strong advocate of euthanasia. Now let us come to the gist of the matter and consider the pros and cons of euthanasia. First let us consider the case of passive euthanasia which is most relevant in the Indian context as it is legal in our country.

When a person is on life support systems and is brain dead or in a coma what exactly is going on with his body? Is it a case of no consciousness in the sense that the thinking capacity of the brain is completely destroyed? Can we depend absolutely on the term brain dead and assume that the person feels nothing at all? The organ in the human body which is least understood by medical researchers is the brain. One never really knows what is going on in this marvelous piece of evolutionary design.

What guarantee do we have that a person who is in coma can never recover? There is the case of Michael Schumaker the famous formula one racing driver who had a head injury while skiing and was in coma for a long time and recovered after years and is now on the road to recovery. Of course Schumaker is a billionaire and could afford the hospital expenses for the costly life support systems that are needed for a long time.

Though we do have such instances when a person recovers after years of coma, most doctors are of the opinion that once a person reaches a point when he cannot survive without life support systems it is highly unlikely that he or she would ever recover. I have known one person who recovered after three days. But he was not brain dead.

Looking at it from this point of view I guess passive euthanasia does sound like a viable choice. Though the fact remains that we have to be absolutely sure that there is no chance of recovery at all. Let us consider the other kind of euthanasia when a person is assisted in ending his or her life. Consider the case of a cancer patient who is in the final stage and there is no chance of recovery.

From what I hear from people, the pain is unbearable and excruciating. I personally know of one case when costly morphine patches could provide relief barely for 5 minutes after which the pain starts again.

If the pain is unbearable for the patient, their kith and kin also have to go through immense grief and agony watching a near and dear one suffer. The patient himself is begging for someone to put an end to the agony. Do all these factors justify us in assisting the patient and helping him to end his life?

I definitely don’t think so. Here the patient is conscious and awake even if he is close to death and going through pain. A human being in the throes of such angst cannot think clearly and logically. And then, as long as there is life and a human being has the capacity to function I for one believe it is one’s duty to fight to the last ditch.

Some may feel I am mouthing off grand words and speaking rather unimaginatively. Maybe if I were facing such unbearable pain with no hope of relief I would also sing a different tune and beg for someone to put an end to my misery. I have faced a lot of mental agony and quiet a bit of misery in life but as far as physical pain is concerned, other than continuous and severe stomach aches for a few days I have not faced anything much.

I still remember those excruciating stomach aches of my childhood and shudder. But when we are trying to discuss a topic like euthanasia one has to be impersonal. We cannot go by what a person himself would feel if he or she were in such a situation. Taking that into consideration I feel if a person’s mind is active and healthy and he is conscious, no one has the right to assist him or her to take their life. So all said and done it is not in our hands to take over mother nature’s natural process and help someone to end their life. That makes it tantamount to abetting suicide.

3 Thoughts to “Euthanasia, Is it justified?”