Skip to content
Books
Reminiscences: The fun I had reading Tintin comics When I Was A Kid 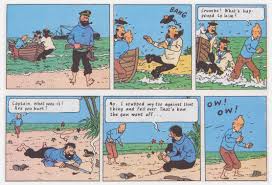 I remember being introduced to my first Tintin comic when I was in my fifth grade. At that time I was a young boy of ten and I had  not yet developed a taste for lengthy comics with a complicated plot. I had a free half day and I borrowed my first Tintin from one of my classmates and read it in an hour as I had to return it quickly. Not much of it registered in my mind and I immediately stopped reading Tintin. But one thing that did register was Captain Haddock’s colorful vocabulary. His powerful vocal cords bellowing the words, “Billions of bilious blue blistering barnacles in a thundering typhoon !!!” left a lasting impression on me.

I revisited Tintin comics an year later when I was a member of a nearby library called the “Book Lovers Center”. This time I had all the time in the world to read the books. Tintin, the very sober and straight as an arrow reporter, Haddock the crusty old sea captain with an arresting personality and a glowing repertoire of inoffensive swear words, the brilliant and daft professor Cuthbert Calculus who was stone deaf but would only admit to being slightly deaf in one ear, all left a lasting impression on me. Of these I liked Captain Haddock the best. He had a heart of Gold belied by his thunderous booming voice and raging temper, his everlasting love for alcohol and a quick and sarcastic wit. And what made him supremely adorable was his ability to mess up every situation, with Tintin having to extricate them from difficulties.

He is first introduced in the book, “The Land Of Black Gold” as an alcoholic captain being double crossed by his first mate Alan who is secretly smuggling opium in the captain’s ship. Tintin confronts the captain and chastises him for being an alcoholic telling him, “Just think captain !! What would your old mother say?”. The captain hilariously bursts out “Boohoo mummy !!!” and promises never to drink again. In the same book the captain and Tintin get marooned in a desert and the captain imagines Tintin is a bottle of whisky and almost strangles him trying to uncork the cap. In the book, “The shooting star” when the president of the society of sober sailors tells the captain, “Remember Captain, the eyes of the whole world and the SSS will be upon you !!!” a crew man asks him where to store some crates emblazoned whisky. Also in the final pages of “The Shooting Star” when the captain is about to deliver a radio lecture on the bad effects of drinking alcohol he is taken ill after drinking a glass of water.

Loch Lomond is Captain Haddock’s favorite brand of whisky. He never tires of settling down in his favorite arm chair in the sprawling Marlinspike hall with a cool glass of Loch Lomond. The captain buys Marlinspike hall with the help of Professor Calculus whom he helps in testing the submarine invented by the professor in “The Red Rackham’s Treasure”. That brings us to the professor. Calculus is stone deaf and the only Tintin books in which he hears properly are the “Destination Moon” and “The Explorers On The Moon”. In these two books he acquires a hearing aid so that he can communicate effectively in the rocket bound for the Moon.

Of all the main characters in the Tintin comics professor Calculus is the only person attracted to the fairer sex as can be seen in “The Castafiore Emerald” when he is enamored of the Milanese Nightingale Bianca Castafiore. The professor’s hearing disability often leads him to mistake the sentences uttered by others for something ludicrous and this leads to some very hilarious situations and puns. In “The Castafiore Emerald” the professor’s answers to questions, when he is pumped by a couple of reporters about the captain and Bianca Castafiore, leads them to believe that they are engaged to be married.

That leads us to the Milanese Nightingale Bianca Castafiore. She is an opera singer from Milan and she never tires of singing “The Jewel Song” from Faust for her admirers. She thinks she is a divine singer and the captain thinks she is unspeakable. Hearing Signora Castafiore sing reminds Captain Haddock of a hurricane that once hit his ship when he was sailing near the West Indies. In Steven Spielberg’s movie “The Adventures of Tintin” when Castafiore sings, it shatters an unbreakable glass case enclosing a necklace. And Castafiore can never get names right. She addresses Captain Haddock variously as Captain Bootblack, Captain Hopscotch and Professor Calculus as Professor Candyfloss.

Things would be incomplete without mentioning Snowy, Tintin’s faithful dog. Snowy is extremely dog-like but unlike any dog I have ever seen. That is what makes him so special. He always speaks but not in one Tintin comic have I seen him being acknowledged by his master or anyone else. This is Herge’s brilliant way of making Snowy’s thoughts alive to us and at the same time strictly adhere to the law of nature that dogs do not speak. Reading his thoughts make Snowy more like a real character in the Tintin comics. His apt comments and quick sarcastic wit make him come alive as much more than a dog. He is extremely faithful to his master and follows him everywhere, even when his doggy instincts tell him that it would be madness to go where his master wants to go.

And it would be extremely remiss of me if I don’t mention the bungling detectives Thomson and Thompson who suffer from spoonerism. They have the worst skills of detection among all detectives but are considered the best detectives in the profession “to be precise”. They always mistake an innocent person to be the culprit and in “The Castafiore Emerald” they blame Irma, Bianca Castafiore’s maid of stealing Catafiore’s jewels and end up being beaten black and blue by her and severely ticked off by Castafiore. Later as usual in their bungling way they blame the Gypsies invited by the captain to live in the sprawling grounds of Marlinspike hall. And finally, when it is proved that the the Gypsies are not the guilty party, Thomson comments, “The one time we catch the culprits they turn out to be innocent.” to which Thompson replies, “One would think they did it on purpose!!!”

Jolyon Wagg has a bombastic personality, always eager to swing a deal for old Rock Bottom Insurance. Always full of vigor and eager for conversation he irritates the captain no end and is always an unwanted visitor at the captain’s residence. Oh, and I forgot Nestor and Abdullah. Nestor is the captain’s faithful butler. He is introduced in “The Secret Of The Unicorn” when he is serving the criminal masterminds the Bird brothers. It is proved in the trial of the Bird brothers that Nestor knew nothing of their activities and was totally innocent and becomes captain Haddock’s butler.

Abdullah is the son of Emir Mohammed Ben Kailash Ezab. He is a mischievous spoilt brat who is never short of pranks which he plays on all unsuspecting people including his father. He appears only in two of the books : the “Land of Black Gold” and the “The Red Sea Sharks”. It would have been nice if he had put in an appearance in many more. Among the villains there are Rastapopoulos  alias Marquis di Gorgonzola, Alan, Colonel Jorgen alias Boris, Colonel Sponsz, General Tapioca and numerous others. Colonel Jorgen is a sworn enemy of Tintin. He crosses swords with Tintin in “King Ottokar’s Scepter” and later appears in “The Explorers On The Moon” when he gets killed.

Colonel Sponsz is the chief of the Bordurian police and in “The Calculus Affair” he tries to steal Professor Calculus’ invention but is outmaneuvered by Tintin and Haddock with the help of Castafiore. He tries to avenge himself for this humiliation in “Tintin And The Picaros” but again ends up failing. In the same book General Tapioca genuinely believing that Tintin, Haddock and Castafiore had plotted against him, because of Colonel Sponsz, invites them to San Theodoros and tries to imprison Tintin and the others. But they escape into the jungle and help General Alcazar overthrow Tapioca and free Castafiore and the detectives Thomson and Thompson.

The most villainous villain of them all is Rastapopoulos. He has a huge bulbous nose like a monkey. He appears in several of the Tintin comics: “The Red Sea Sharks” and “Flight 714” chief among them. It is in “Flight 714” when he tries to usurp the fortune of the billionaire Laszlo Carreidas that he is finally captured by aliens along with Allen. Among all the Tintin comics the one I liked best is “Tintin in Tibet”. It was written at a time when Herge was going through a very difficult phase in his life and was facing severe problems of depression. This is reflected by the sentimental tone of the book. In this book Tintin risks his life in search of a Chinese friend named Chang and moves mountains to rescue him from the clutches of the Yeti or the abominable snowman.

He is ably supported by Captain Haddock who at one point in the book decides to sacrifice his life for Tintin’s sake. The snow clad Himalayan mountains which form the backdrop for the book are a reflection from Herge’s own dreams in real life at that time, when he saw walls of white colored snow in his dreams. The other noteworthy Tintin books are “The Calculus Affair”, “The Secret of The Unicorn” and its sequel “Red Rackham’s Treasure”, “Destination Moon” and its sequel “The Explorer’s On The Moon”. The list is endless. Tintin comics are one of my favorites and I still remember lying curled up with them as a kid.

2 Thoughts to “Reminiscences: The fun I had reading Tintin comics When I Was A Kid”