Skip to content
Entertainment
Down Memory Lane With The Reading Habit 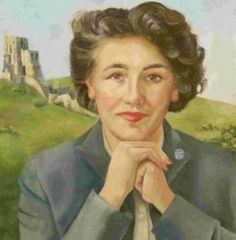 My earliest memories of reading a novel go back to the time when I was in my fifth grade. I had just moved to a new school and the children there were avid readers of Enid Blyton’s books. I was introduced to my first full length Enid Blyton by a classmate. I still remember the story vividly. The book was titled: “The Sea of Adventure”. 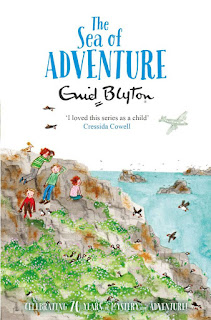 The story was about four children Philip, Dinah, Lucy-Ann and Jack who travel to a remote island and tackle criminals with their friend Bill Cunningham who is revealed to be a British secret service agent in the end. I remember being enthralled by the book and also being amused by the antics of Jack’s pet, the parrot Kiki.

I soon became a fanatical reader of Enid Blyton’s books much to my father’s dismay. He thought the books would make me neglect my academics. I used to find Enid Blytons far more interesting than my Science and Math books. Soon I was reading books from all the famous Enid Blyton series.

Pretty soon I had finished reading the books featuring the famous five, the five find-outers, secret seven, the Mallory Towers series and literally everything I could lay my hands on. Of these I used to like the five find-outers the best. The final chapter used to be a particularly thrilling read, when the chief of the find-outers, the chubby and plump fatty, would explain the crime and unmask the real culprit much to the the delight of Inspector Jenks and the chagrin of the village policeman who could never be the first to solve a case. 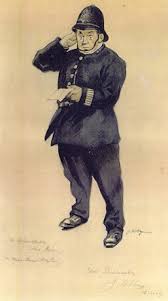 Mr. Goon
I particularly enjoyed the innumerable and infuriating tricks played by fatty on the bombastic village policeman Mr.Goon using many disguises effectively.

I still remember the description given by Enid Blyton of the village Peterswood in which the five find-outers lived. It was something straight out of a fairy tale, with a dairy at every corner, lovely houses with beautiful gardens, roads flanked by tall trees and a good amount of greenery. I was so overwhelmed by the description that I remember trying to locate Peterswood in the map only to discover to my dismay that the village was a figment of Blyton’s imagination.

In fact, my admiration for fatty went so deep that in childish fits of fancy, I used to pretend that I was fatty and was always helping the local police in my colony to solve many a mystery that baffled them with their inferior powers of deduction. 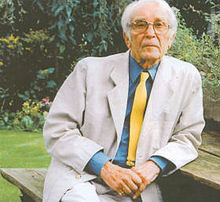 I was so enamored of Enid Blytons that I took an oath that I would make sure I finished reading all her books before dying. Anthony Buckeridge’s schoolboy series featuring Jennings were noteworthy in the humor theme. I remember rolling over and over in splits reading about the endless exploits of  Jennings and his friend Darbishire.

Getting hold of books was very difficult for me as my father refused to buy them on the pretext that these books were making me neglect my academics. I used to borrow them from friends. In the middle of my eighth grade I discovered that a mobile library run by the government was putting in an appearance at our colony every Sunday.

The charges were very nominal, a mere ten paise for a life time membership. This was in the 70’s. After a lot of coaxing and cajoling by myself and my mother, my father reluctantly allowed me to become a member.

This opened up avenues to read books by a host of other authors. Getting hold of books was not as difficult as before. From Enid Blytons I graduated to Hardy Boys and the Three Investigators. Jupiter Jones who was the brain behind the three investigators series was my role model for quiet some time. I remember occasions when my father happened to see me deeply engrossed in a book. He would immediately make me hand the book over to him and ask me to narrate the story. I would reel it off in a jiffy and he would bemoan “I wish you would do that with your Physics and Chemistry lessons”.

After my ninth grade I got introduced to Agatha Christie, Erle Stanley Gardner’s Perry Mason series and James Hadley Chase. It was now time to pretend I was the brilliant lawyer Perry Mason, always one step ahead of the shrewd but not quiet so shrewd policeman Lieutenant Tragg. I was solving murder mysteries by the dozens in my imagination and within no time I had finished the Perry Mason series. 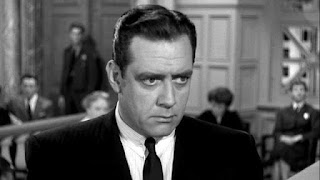 I did not like James Hadley Chase much as I found most of the characters in his books were rather slimy and the books had few heroes. Nevertheless the Mark Girland series and the Don Micklem series were ones I particularly enjoyed. 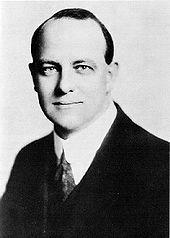 In humor, I picked up the PG Wodehouse books and his Bertie Wooster series used to leave me gasping with uncontrollable laughter. The complicated situations in which Bertie got entangled and the way his valet Jeeves used to extricate him from them used to be a subject of unending discussion with my friends. 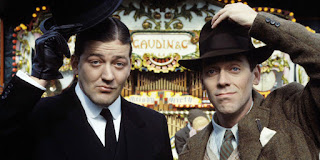 Bertie Wooster and Jeeves in TV

These lighthearted books used to be my favorites for a long time and were among some of the best I have ever read. In college I moved over to the famed Robert Ludlum, Desmond Bagley and scores of other writers. I also read a lot of non-fiction particularly books by Bertrand Russell and Ayn Rand. After I started working I hardly found time for reading and for nearly twenty years I read very few books.

I resumed my reading habit again when I was forty five. This time around I read a lot of non-fiction. In fiction other than a few books by Chetan Bhagat, which I did not like much, I did not read too many. My favorite non-fiction books were the ones by Stephen Hawking, Fritjof Capra, Brian Cox, Carl Sagan and John Gribbin. Of these I found Schrodinger’s cats by John Gribbin a really riveting read.

Another book I found a very refreshing read was “Sapiens, A brief history of humankind” by Yuval Noah Harari. The Pulitzer winning “Guns germs and steel : The fates of human societies” by Jarred Diamond was an extremely informative book on humanities dispelling many commonly held misconceptions.

Books by Stephen Hawking were a tougher read, at least for me. I found I had to stop and think deeply every time I finish two or three pages in order to understand the concepts presented. Another book that particularly captured my imagination was the one by Paul Davies titled “The Eerie Silence: Are We Alone in the Universe?”. It is a must read if you are interested in extra terrestrial life.

Of all the authors I have mentioned I find that the books which have left an indelible mark on my mind are the first Enid Blytons that I read in my childhood.

Sounds surprising doesn’t it? Perhaps it is the child in me still  speaking. Even now, at fifty there are times when I pick up an old Enid Blyton and browse through the pages. They bring back warm memories of my childhood, the thrill of reading books unknown to my father and the many pleasant evenings I spent curled up under the rajai in the cold Delhi winter with only an Enid Blyton to keep me company.

2 Thoughts to “Down Memory Lane With The Reading Habit”