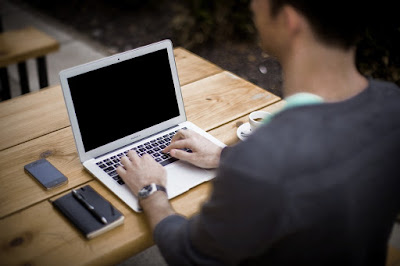 My love affair with reading began in my sixth grade when I was introduced to my first full-length Enid Blyton novel by a school friend. I read the book and simply loved every word of it. From Enid Blyton, I graduated to the Hardy Boys series written by Franklin W Dixon and the Nancy Drew series written by Carolyn Keene. I was also addicted to a series called The Three Investigators. Then I moved on to authors like Erle Stanley Gardner, Agatha Christie, Robert Ludlum and James Hadley Chase. By the time I was in IIT I was reading books by Bertrand Russel and Ayn Rand.

Though I was a voracious reader I never really had any inclination to write. The earliest memory I have of writing something was in the fifth grade when I wrote an independence day speech and read it out in the school assembly. When I showed what I had written to my father he was simply thrilled. And he proudly showed the small piece of writing to all his friends, accompanied by a good deal of chest thumping.
There used to be a number of boys in my school who used to write fiction (mostly in the genre humour) and read out what they had written during assembly. They also used to participate in many school events. Once, these boys even brought out a school magazine which was unfortunately discontinued after one print.
The rest of us used to look up to these fellows and I often used to tell myself that I was quite incapable of writing like them. Further, I have often been told by many people that the one quality I lack is a vivid imagination. A lot of people passed derogatory remarks when I ended up being one of the two boys in school who secured distinction (above 75% marks) in English in the tenth board exams.
Those days securing a distinction meant something really big, unlike now when the schools seem to be teeming with budding Shakespeares who secure hundred per cent marks in English. Anyway, in my case, my securing a distinction was attributed to a fluke by most of my school friends. You see, I did not belong to the elite set of literary cognoscenti of the school.
But my relationship with poetry is quite old. During my twelfth grade, I used to stay in my aunt’s house in New Delhi as my father was transferred to Chennai in the middle of the academic year. My uncle and aunt used to live in an apartment that was part of the terrace. And most evenings, I used to spend quite a bit of time standing outside staring at the moon and conjuring up poems in my mind. I never really put down those poems on paper.
My aunt was seriously worried to find me gawking at the moon and the stars every evening and asked me about it. For want of a better reply, I told her I enjoyed looking at the Moon as it was beautiful. She would then stare back at me as if I was mad as a hatter.

Later when I was in IIT I did try my hand at writing. I was not considered a particularly bright chap at IIT. Why come to think of it, I was mostly looked down upon. In my second year of engineering, the literary gems of the college brought out a magazine called Impulse. After the first edition of the magazine was printed, I thought I would also try my hand at writing something. I wrote a humorous poem which also had a philosophical bent to it. I took it to one of the members of the editorial board of Impulse and showed it to him. He told me the poem was pretty good.
I then asked him if he would allow me to be a member of the Impulse team (I did not have the guts to use the phrase ‘editorial board’). He politely fobbed me off with a few courteous words, all the time assuring me that my poem was simply out of the world. A bit upset I showed the poem to one more person and this fellow accused me outright of plagiarising it from somewhere, adding that I was not capable of writing anything of such good quality.
I tried to convince the guy that it was my own stuff, but there was no chance in hell he would believe me. There was no way to prove my point because there was no internet those days where you have sites that detect plagiarism. To cut a long story short that put paid to all my attempts at writing for a very long time. I have lost the piece of paper on which I had written that poem or else I would reproduce it here.
Now the scene shifts to January 2017. I am 50 years old and working as a lead software engineer in a Multi-National company. The entire organization is looking forward to the cultural events to be held on the founding day function of the company which is to be celebrated in a few days time.

My close friend Piyush (who incidentally is one of the few people who have the patience and decency to tolerate my hellish temper) comes up to me and says, ‘Jai, why don’t you perform something on stage this year. You are very senior and we would love to see you do something on stage.’

I am taken aback and I tell him, ‘I simply have no skills of that kind Piyush. Please do forgive me. I really can’t do anything.’

But he is insistent and just in order to humour him I ask, ‘All right you tell me what I should do.’

And he says, ‘Why don’t you write a poem and present it on stage?’

I immediately dismiss the idea and tell him I simply do not have the imagination or creativity to write a poem and that my earlier attempts at literary adventures have always proved disastrous. But that weekend just for the heck of it I wrote a poem based on the antics of my mischevious daughter who was ten years old at that time. To cut a long story short I presented this poem at the function and it was a huge hit. I finally created a blog and put the poem in it and Jai’s Writing Retreat was born.

Initially, I planned to write only poems but slowly I began including articles. This was followed by photography and then came fiction. So you see, the birth of my blog was an accident. But now, writing has become a part of me and my blog means a lot to me. In addition to the posts on my blog, I have also written two eBooks in Amazon Kindle. I am now trying to get down to writing a full-length novel. I find that rather difficult with a full-time job. But in any case, I intend to take up writing full-time after retirement which would be in another five years from now.

My blog has received a good amount of appreciation and I have also made plenty of friends in the blogging circles. I never imagined that writing would become a part of my life especially after my early years when I received a lot of discouragement from umpteen people. But as they say, it is always wonderful to discover things you like no matter what your age.

This article is written as a part of SuperBloggerChallenge conducted by Healthwealthbridge.com https://healthwealthbridge.com/health/ ,  Allaboutthewoman.com https://allaboutthewoman.com/woman-health/  and powered by Instacuppa https://instacuppastore.com and should not be repurposed, republished or used otherwise. The content herein is owned by the blogger. SuperBloggerChallenge is not responsible for any infringement caused.
JaiFebruary 22, 2019May 1, 2019