Skip to content
Miscellaneous
Train Travel When I Was A Kid 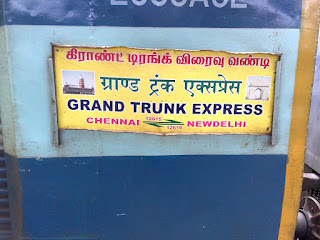 I wonder whether the younger generation is aware of what it was like to travel by trains in India thirty-five to forty years back. What it was like not to have instant ticket booking services like IRCTC and not being able to book train tickets in a hurry through tatkal schemes? Those days booking train tickets used to be a major task. If you wanted to book a first class ticket you had to get the recommendation of a high level gazetted officer.

My earliest memories are those of trains pulled by steam engines. Chuffing black puffs of billowing smoke, the steam locomotives used to laboriously pull bogeys up steep hills and valleys. I was in my fourth grade at that time. A train journey used to be a great adventure for me. Looking out of the windows at the scenery, one could end up with an irritating particle of dirt in the eyes. Not that it dampened my eagerness to look out of the window to capture every bit of the scenery.

Later when I was in my fifth grade, my father who was a central government employee got transferred to New Delhi. He could avail what in those days was a great privilege: an LTC or a leave travel concession. Along with my father’s promotion the engines serving Indian Railways also got promoted to diesel engines.
Those days the Grand Trunk express used to be a prestigious train at its pinnacle of glory before giving way to the quicker and accident prone Tamil Nadu express. It used to be a daily train coveted by all the South Indians living in Delhi. Come summer holidays my sister and I would eagerly await the evening when my father would come home smiling happily and announce grandly “Sakunthala, I have booked our tickets for Madras in first class!!”.  The two of us would erupt in raptures of joy.
Time would not pass quickly enough for us as we awaited the date of departure. My mother used to start packing the more important items two days before the  date of departure. Clothes, toiletries and food packets (my parents had an aversion to food sold in trains and trusted nothing but home made stuff) were all part of the luggage. The curd rice, avakkai pickle, puliyogara made of tamarind paste, idli and mulagai podi together with banana leaves for eating them from used to add a unique flavor to the journey.

Those days the railways did not provide blankets, pillows and bed-sheets. My father used to assemble all our bedding and other miscellaneous items in a huge hold-all with myself and my sister buzzing around excitedly. Oh, I am forgetting the all important Surai to fill water at the stations to keep it cool. Unlike today, bottled water was unheard of those days. It used to be a very exciting journey from New Delhi to Chennai (Madras at that time).
We used to arrive at the station two hours before the train’s departure time. And as usual my father would set about finding a coolie to carry our luggage to the coach. Those days suitcases with wheels were unheard of. Unlike today one could not easily wheel one’s luggage to the coaches and coolies were in great demand. My father would bargain with the coolie and finally they would settle down at a reasonable price and we would eventually arrive at our coach.
The train would move from the station and come night time, my sister and I would fight over which berth we would occupy. My father would settle the issue by sending me to the top berth as I was the elder of the two. The day time would see vendors entering the coaches looking for a quick bargain selling their wares. All kinds of toys, handkerchiefs, hand-made artifacts, fans made of  paper, kaleidoscopes, food items – especially groundnuts would be sold.

I remember the Krishna river at Vijayawada in all its glory. As the GT crossed the river bridge my mother would throw a few coins out of the window as a token of respect to the holy river. The scenery between Itarsi and Nagpur was magnificent, inter-spaced with a number of long tunnels and my sister and I used to scream in delight as we crossed those tunnels.
My father used to get down at every third or fourth station to fill water in the surai with me skipping by his side keeping an anxious look-out for any signs of the train pulling out of the station. When I think of that today I really do feel it is a sad reflection on the state of our society that we have started bottling a commodity like water and selling it for monetary gains.
At every station, people used to rush to the ticket examiners who enjoyed an exalted status and were not above accepting a few bribes for a berth. Sometimes the train used to get delayed by hours which used to make our parents groan but we kids used to sigh in contentment as this meant a few more hours for us in the train. Finally after two days the GT would pull into the Madras station and we would reluctantly exit the train knowing that the return journey was always there.
Later I went to college and every semester I used to travel with my friends by the Ganga-Kaveri express from Varanasi to Chennai. It used to be a different kind of experience with friends and class-mates.
The cheerful banter, the thrill of having interminable chayas and the camaraderie used to be an experience of a different kind. Of course, I still do travel by train sometimes but my journeys have become shorter overnight journeys from Cochin to Chennai. Even today those long train journeys of my childhood make me heave a sigh of nostalgia. I wish I could turn the hands of the clock back.
JaiJanuary 8, 2017May 1, 2019