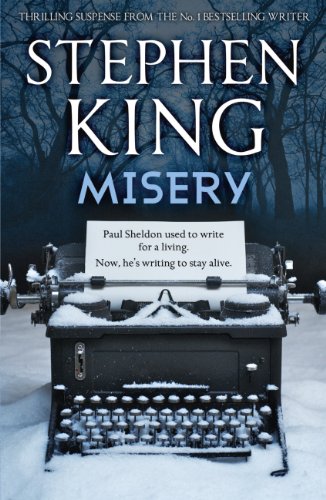 Pages: 365
Available At: Amazon
The Plot:
Author of best-selling Romance novels, Paul Sheldon is rescued after an accident by a fan. He is incapacitated and confined to the bed. The fan, Annie Wilkes is a dangerously insane woman whose mind is bordering on psychotic mania. She is also a trained nurse. She keeps Paul imprisoned in her remote cabin and attends to his needs.
Paul’s latest novel in which he kills Misery Chastain, the heroine of all his romance books, has been published just before the accident. Paul kills Misery in the book because he simply hates her. He wants the kind of appreciation every writer hankers after – recognition for his potential to write varied genres. But Annie Wilkes simply loves Misery. When she reads Paul’s latest book and finds out what he has done to Misery she goes simply crazy.
And now Paul has to write another novel and bring Misery back to life and that too in a way that is convincing to a maniac like Annie. If he is unable to do that Annie will kill him. Till now Paul was writing to make a living, but now he finds himself writing to stay alive. Will he be able to save his life?
My Take:
Pros:
The book moves into the thriller mode very quickly and without too much ado. There is no elaborate build up to introduce characters and suspense over twenty or thirty pages. You find yourself gasping in horror very quickly. The character of Annie Wilkes who is insane and psychotic is brought out vividly. The author has done quite a bit of research into mental illness and has given us an excellent picture of how an insane mind works.
The violent parts of the book and the horror involved, make your stomach churn in a way only Stephen King’s books can. The portion of the book where Paul uses trickery to bring Misery Chastain back to life and subsequently has to re-write it in a way that is convincing to crazy Annie is simply out of the world. The book is worth a read for lovers of the horror genre. It really holds you spell-bound and is beautifully written.
Cons:
The starkly described violence and gore are not everyone’s cup of tea. The violence could have been made more subtle. This is a book meant only for people who love the Thriller/Suspense genre. Sometimes the author has a tendency to muddle up the sequence of events which leaves the reader slightly confused. This does not happen often and is rare.
Conclusion:
For lovers of the Thriller/Suspense genre, the book is one great read. The book has also been made into a hit movie. I go with a 4/5 for Stephen King’s Misery. Do read it some time.
Author’s Note: This article is written as a part of SuperBloggerChallenge conducted by Healthwealthbridge.com https://healthwealthbridge.com/,  Allaboutthewoman.com https://allaboutthewoman.com/  and powered by Instacuppa http://blog.instacuppastore.com and should not be repurposed, republished or used otherwise. The content herein is owned by the blogger. SuperBloggerChallenge is not responsible for any infringement caused.
JaiMarch 3, 2019May 5, 2019