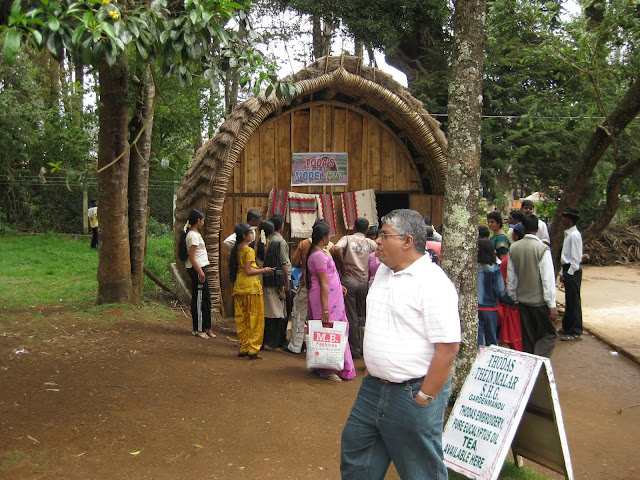 Our blog train’s tour of India started off on the 1st of February at the Wagah border with immense enthusiasm. We have cut right across India over the last six days and today we find ourselves at the southernmost state of India, Tamil Nadu. I am very happy to receive the baton for this #XploreBharat blog train from Aditi to take us further. This journey across India is getting more and more interesting as the days go by.  Today I take pleasure in introducing my fellow travellers to my native state of Tamil Nadu where I have spent nearly twenty-five years of my life.

Summer is approaching and I assume my fellow travellers are beginning to feel the heat a bit. With this in mind, I have decided to take you to that Queen of hill stations, Ooty in Tamil Nadu, where you can experience the cool and refreshing mountain air and rejuvenate your body and mind. I would first of all like to inform you that the correct name for Ooty is Udagamandalam. The Britishers shortened it to Ooty and originally it was a place where the Viceroys and other important officials of the British Raj used to vacation to escape the hot summers of the plains. 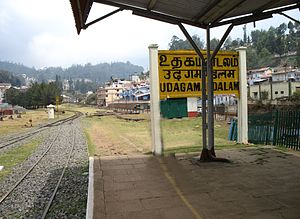 I visited Ooty a couple of years after marriage, which is nearly eleven years ago. This was my first visit to Ooty, though my wife had spent a considerable part of her life living in Aruvankadu, a town close to Ooty in the Nilgiris. My late father-in-law was employed in the Ordinance factory in Aruvankadu. To clarify, there are several small towns very close to each other, nestling in the Nilgiris. When we talk of Ooty, keep in mind that though it is the star attraction, there are several other towns in the Nilgiri hills like Coonoor, Aruvankadu and Wellington quiet close by.

I had heard quite a bit about Ooty from my wife and I was simply thrilled to be fulfilling my childhood dream of visiting this place. We were actually five people, myself and my wife, my sister-in-law, her husband and their eight-year-old son travelling by car. Our first destination was Coonoor where we planned to spend the night at the house of one of my wife’s childhood friends before we set off to Ooty by train the next morning. We particularly wanted to travel by train after reaching Coonoor because we knew that would be much more enjoyable. My wife’s cousin’s family was also supposed to join us at Coonoor for the trip to Ooty.

The drive through the steep mountain roads to Coonoor was simply marvellous and the view was breath-taking. Once we reached Coonoor we made our way to my wife’s friend’s house. We were greeted very warmly. Soon my wife’s cousin’s family which comprised of her cousin, his wife and two sons joined us.

The next morning we caught the train from Coonoor to Ooty. My wife made sure that we got tickets for seats in the first class compartment of the train which was also part of the guard’s cabin. Let me explain a bit about these trains that connect the towns in the Nilgiri hills. They are basically toy trains. The tracks are meter gauge tracks and when the train is moving towards higher altitudes as it does when travelling from Coonoor to Ooty the engine is attached at the back and it pushes the train forward. Trains use a rack and pinion system and the guard cum operator seems to use a kind of steering to engage and disengage at various signal points.

We got into the first class compartment. The view was simply breath-taking. Here is an image we clicked of the view looking ahead as the train moves forward along the tracks. 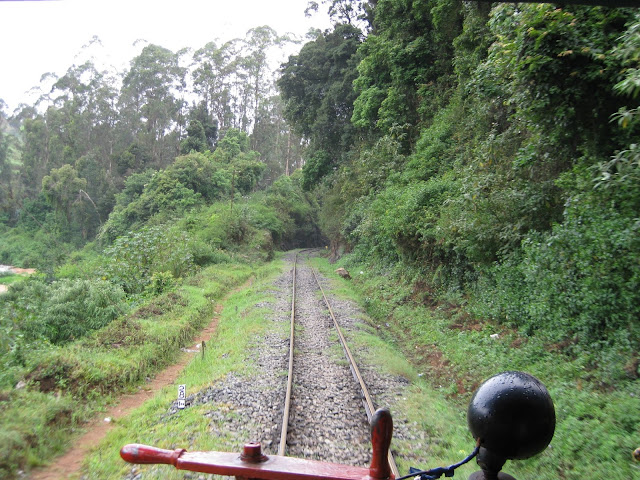 The kids were really excited to see the operator manoeuvre the steering wheel and pestered my wife to ask him if he would allow them to hold it for just a few seconds. My wife did request him to do so but her request was politely turned down. My wife was a bit surprised and told me that when she and her siblings were kids they knew most of the train operators on this line and they used to allow my wife and other children to fool around a bit. I guess it is a bit dangerous and against regulations. And this train in-charge was perhaps more conscientious about his duties than the ones who used to work the line during the time my wife was a kid 😃.
We soon got down at the Ooty station and our first destination was the botanical garden, renowned for its exquisite flowers. We reached it soon and found ourselves in a beautiful flowery haven. And believe me, the beauty of the glorious flowers blooming all around us held us spell-bound. It was a really dreamlike experience to be surrounded by colours of so many hues and shades. Makes a person feel like he or she is in heaven. Here are some images we clicked. 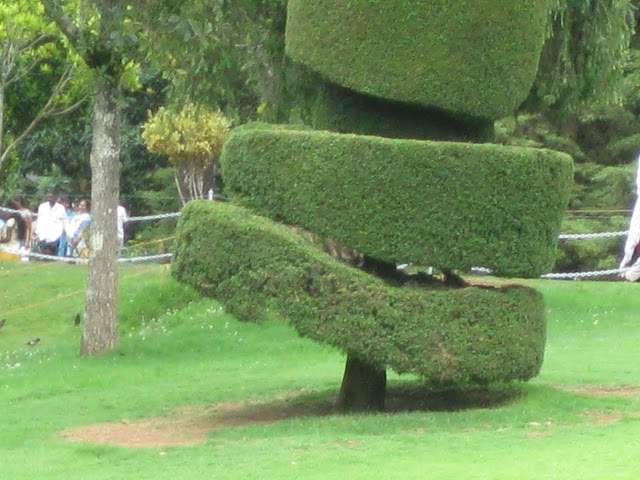 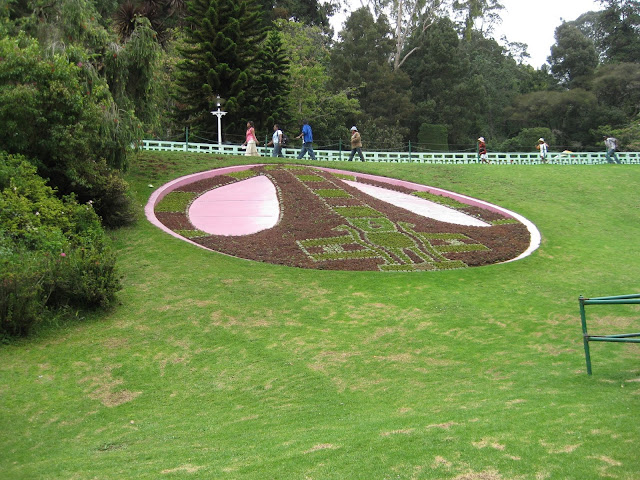 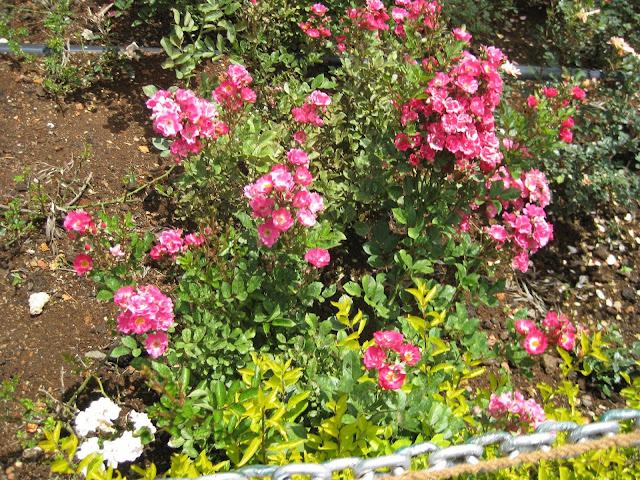 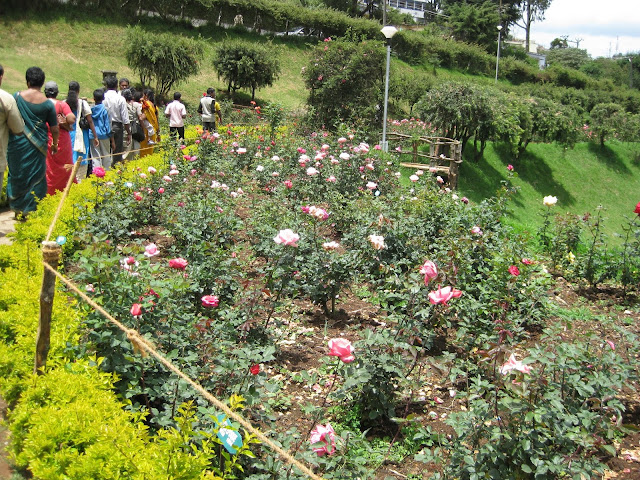 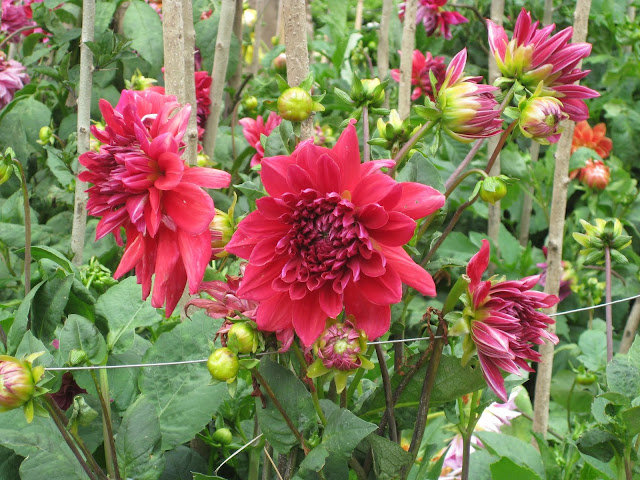 There is a flower called the Kurinji Malar which blooms once in twelve years in Ooty, but unfortunately, the year we visited was not one of the years when it bloomed. It is also called the Nilakurinji and its botanical name is Strobilanthus Kunthianus. Here is an image I have borrowed from Wikipedia 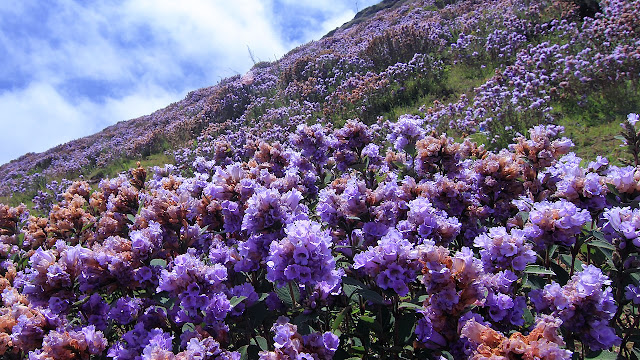 Picture Credits: Wikimedia.org
The next place we visited was the Ooty lake. The boats used to ferry passengers are pedal boats. They have the capacity to accommodate four people at a time. 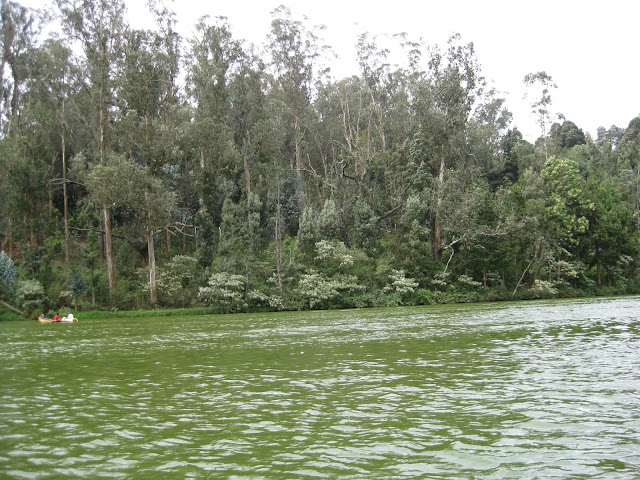 Naturally, all of us decided to take boat rides. I remember when we were pedalling somewhere in the middle of the lake I began wondering about how deep the waters were at that point. I asked the boatman accompanying us about this. He told me, ‘Easily twenty-five to thirty feet, Sir.’ It suddenly occurred to me that boating was a slightly dangerous business and I further inquired if mishaps were frequent. And he replied with a grin, ‘Accidents have occurred and I have rescued people from drowning myself. But boating here is generally very safe and there is absolutely no need to worry.’

It occurred to me that there is always some risk in indulging in anything adventurous, but then there is a risk in even crossing roads which we do every day. What is life without a bit of danger in it? We also visited the famous Pykara falls and lake. I don’t seem to have any images of the Pykara falls. Boating is allowed in the Pykara lake too. My wife and I were not too keen on going boating again so soon. But the others in our group were eager to try their hand once more. Here is an image 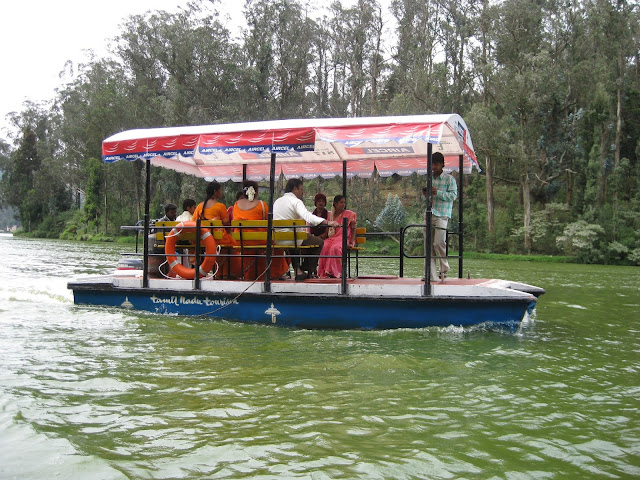 There were some tea plantations which we visited though I do not seem to have too many images of that. Here is one I found. 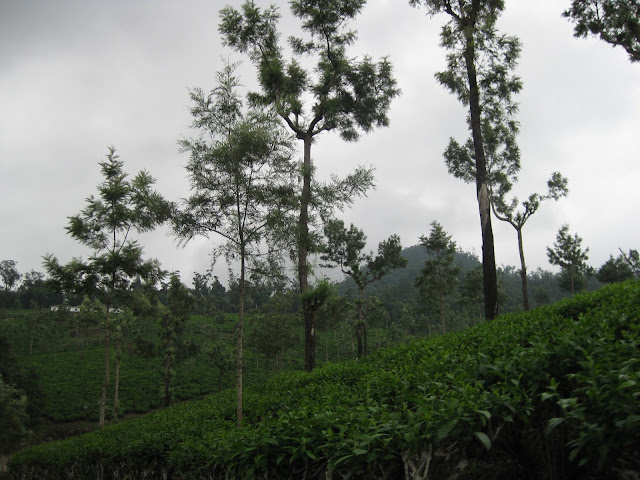 Next, we stopped for a cup of special Eucalyptus oil tea. The very first image you saw in this post is that of me with a king-size tummy posing for a photo in the tea stall where we drank tea.

After that, we did some shopping and made quite a few purchases. By then it was nearly evening and we made our way back to Coonoor. The next day found us reluctantly driving back homewards. We can’t keep holidaying, can we? Sooner or later we have to return to the business of everyday life. To my readers, I have only one thing to say: if you get a chance to visit Ooty, don’t let it slip by. It is a marvellous place. It is worth your money and time.

And tomorrow, we go racing back to north India again, to Kashmir the paradise on earth. I hand over the baton of the #XploreBharath blog train to Saba who will take us there.

Note: Two of the images used in this post are free images from Wikimedia.org for which I have given appropriate credits. All the other images used are owned by me and captured using my camera. 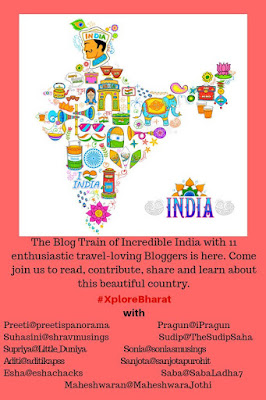