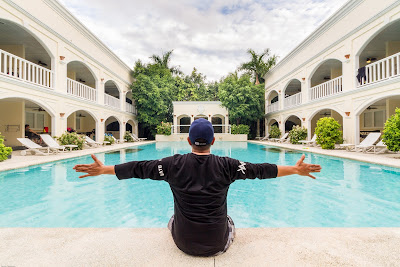 I woke up at midnight as usual when I heard the sound. It was the sound of splashing water. It seemed to be coming from the swimming pool as if someone was having a midnight swim. I had been hearing it every night for the past week. Every night the sound had been growing in intensity. It was as if someone was wading deeper into the waters each passing day. I had ignored the sound for the first few days.
But for the last four days, I had stepped out and checked the swimming pool. There seemed to be no one there. I had returned to my room and managed to fall asleep after tossing and turning a little bit. My imagination was probably working overtime, I told myself. My mind had been in a rather depressed state ever since my wife Mary had disappeared six months back.
Tonight, as usual, I got out of my bed and stepped out. I walked over to the swimming pool and sat by the edge. There was nobody in the pool as usual. The splashing sound had stopped. I lit a cigarette. I looked at the calm placid waters of the pool. I remembered the times I had spent with Mary in the swimming pool. It had been my idea to construct the swimming pool as an addition to the huge estate we lived in. Mary had not been really keen on adding a swimming pool to our estate.
I had really loved Mary. She was extremely pretty. She had blue eyes and an upturned nose. Her pretty face was framed with wavy, lustrous blond hair. She had meant everything in the world to me. We had been a very happy couple. I remembered our times together. She would wake up every day at 5.30 in the morning and bang her pillow on my face. She would be half undressed. I would grab her and pull her down. We would make love passionately.
Then she would get out of the bed after half an hour, walk naked to the kitchen to prepare breakfast. She would come back to the bedroom with two omelettes and a plate full of beef and tomato sandwiches. We would finish our breakfast and after an hour we would step out to the pool for a swim. Mary was not a natural at swimming but could find her way around in a swimming pool. I loved to watch Mary in a bikini. She would step out of the pool drenched and dripping and I would immediately grab her from behind, strip her clothes off and we would make love passionately.
Sometimes I would play tricks on her by pulling her legs from below the water as she splashed about. My Mary had meant everything in the world to me. But all that was in the past. Mary had disappeared six months back and the police were clueless about her whereabouts. The vast estate that had belonged to her had passed on to me.
Sometimes we used to go for a midnight swim in the pool. But that was rare. I remember the last time we had we had been in the swimming pool at midnight. I had grabbed Mary’s leg from below and pulled her under and held her head below the water until she had choked to death. I had buried her body in the vast grounds of the estate. You see, I had really loved Mary but I loved the idea of inheriting her vast estate a wee bit more.
After ten minutes of watching the waters of the lake, I finally stood up, As usual, my nerves had made me imagine things, I thought to myself. I shrugged my shoulders and turned to make my way back to my room. Suddenly, I heard the splashing sound again. I turned back to look at the pool. Suddenly, a long arm made of rotting flesh and covered with weeds stretched itself out of the pool, grabbed me by the neck and dragged me into its depths.
Author’s Note: This post is a part of Write Over the Weekend, an initiative for Indian Bloggers by BlogAdda.
JaiDecember 8, 2018May 9, 2019 2 Thoughts to “WOW: The Splashing Sound”