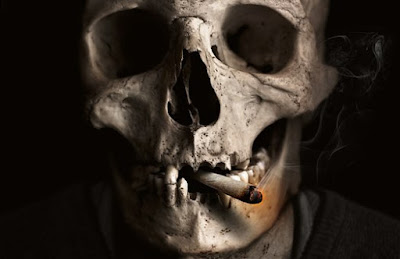 I am re-blogging a very old post of mine which I wrote more than a year back. This post describes my personal war with the smoking habit. I am re-posting it in the hope that it may help those of you who are trying to kick the habit of smoking. So here goes…
It all started as a fad. I was one of those straight as arrow young men who considered smoking a taboo as is customary in all orthodox south Indian families. My parents did not have any vices and the same can be said of my uncles and aunts. After I secured admission in IIT-BHU my father accompanied me to my college in Varanasi to admit me in the first year and get me settled in the hostel. During the train journey from Chennai to Varanasi, almost all first-year students were accompanied by their fathers. We were all in our best behaviour.
I was extremely surprised to see that many of the seniors who accompanied us on the train were smoking. That was when the idea that smoking was the trendy thing to do took root in my fertile young mind. But I still had my doubts. These were IIT students and in my mind, smoking was something common only among the uneducated rural folk. Not IIT students. It was three to four days before my father and the fathers of the other first-year students left the campus.
After seeing off my father at the railway station, I came back to the hostel and walked into the room of a particularly bright and engaging youth with whom I had struck up a warm friendship. I was extremely surprised when I found him with a Red and White (cigarette brand popular in those days) dangling between his lips. That was when I got the urge to try out smoking. The urge was compounded by the idea that it was what all modern people do.
I vividly remember my first puff from a cigarette. It made me cough and my eyes streamed with tears. But that did not deter me and over the months I persisted with smoking, the idea being that I should be part of the modern trendy crowd. Within six months I was smoking nearly a packet a day and I had also become an expert smoker in the sense that I had learned the art of taking the smoke into my lungs and holding it there. I had also learned to nonchalantly blow rings with the smoke.
Then the negative effects started appearing. Before I began smoking I was a healthy youth with a balanced physique and I now started losing weight and became thin and reedy. I used to have a regular account at the cigarette shop and it used to drain me of money. I requested my father who used to send me six hundred rupees a month (a hefty sum those days) to send me a hundred more. By the time I was in the third year I was smoking nearly fifteen cigarettes a day and my parents knew about it. My parents were shell-shocked. In their eyes, smoking was the ultimate crime.
Slowly the insides of my teeth started getting stained with Nicotine. That was when I realized that I was not a part of any trendy crowd but had unwittingly allowed myself to become a slave to a demonic habit that could destroy me. I made sincere efforts to give up the habit. Every now and then I would suddenly throw away the cigarette I was holding, telling myself that I would never touch another cigarette again. But within an hour I would be smoking again. I tried reducing the number of cigarettes gradually but that too did not work.
The habit stuck to me like a leech. One morning when I was nearly thirty-five, I suddenly found myself panting hard. My father took me to a nearby physician and he warned me that if I was interested in living then I had to give up smoking. I made a solemn vow that I would never touch a cigarette again. Within two days I had given in to the temptation once more.
Four days later, I woke up in the middle of the night, short of breath and completely exhausted and panting. My parents immediately rushed me to the nearby multi-speciality hospital and the doctor in the casualty ward examined me and gave me some medicine and sent me back. We came back home, and I tried to sleep. Within ten minutes I was short of breath again.
My father rushed me to the hospital once again, choking and gasping, in the dead of the night at 1.00 AM. Fortunately, there was a bright young doctor there who knew what to do.  He immediately fitted an oxygen mask to my face and revived me. I still sincerely believe that if I had been delayed by just another five minutes in reaching the hospital I would not be alive to tell the tale today.
I was admitted to the hospital for over fifteen days. X-rays of my chest revealed nothing seriously wrong except severe congestion with phlegm. I was put regularly on the Nebulizer till my breath became normal. I was back on my feet in 20 days and discharged from the hospital. It has been seventeen years since then and I have not touched a cigarette.
Those ten minutes when I was rushed to the hospital, choking and gasping, are still green in my memory. I have shared my personal experience with cigarettes because I want all those men and women out there who are addicted to smoking to realize what it can do to them. Stop before it is too late. Everyone may not be as lucky as I have been. Do not wait for a calamity to get you to stop smoking. You may end up very dead.
JaiOctober 23, 2018May 9, 2019