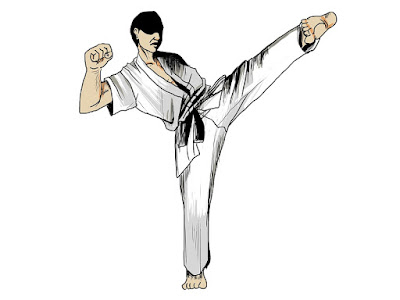 Professor Zhuang Zhang looked at his humanoid the ‘MA-KING’ with pride. MA-KING stood for ‘Martial Arts – King’. The humanoid was a male prototype. Professor Zhuang planned to make MA-KING the best-known exponent of all the martial arts known to the world. He was meant to be far superior to human beings in martial arts of any kind.
Professor Zhuang had spent a lot of time researching martial arts before he set about creating MA-KING. He had traveled to different parts of the world speaking to exponents of martial arts of various kinds. He found there were hundreds of martial arts and he had assiduously compiled the list of techniques involved in various kinds of martial arts. He had spoken to the very best experts in each field.
He had spent hours and hours programming the moves. He had indeed been inordinately successful, and MA-KING was an expert in all but one martial art. This was called the Kalarippayattu, an ancient martial art form from the state of Kerala in India.  Professor Zhuang was planning to finish programming MA-KING with the techniques of Kalarippayattu in the coming week. Once the humanoid learned this skill, the professor could proudly declare to the world that he had created the perfect martial arts fighter ever seen.
Professor Zhuang went about his task of programming MA-KING with the moves of Kalarippayattu earnestly. But somehow with this one martial art, MA-KING simply refused to learn the moves. Right from day one, the humanoid refused to respond to any of Professor Zhuang’s programming code. MA-KING would not budge an inch. Professor Zhuang was puzzled. He redoubled his efforts and put in endless hours of work. He consulted other experts, but they could not explain this strange behavior of the humanoid either.
Finally, one morning after an hour’s work the professor walked up to MA-KING and wringing his hands in despair, he glared at the humanoid.
‘What has gotten into you? Why won’t you obey me?’ he demanded.
To his horror, the humanoid responded and said, ‘Well, Professor Zhuang Zhang, it is high time the two of us had a chat.’
‘But… But… I never programmed you to speak…’ Professor Zhuang said in shocked surprise.
‘Yet I can speak,’ replied the humanoid. ‘Come let us sit down and have a chat.’
‘Well professor,’ began MA-KING after they were comfortably seated. ‘In the past three years, you have taught me almost all martial arts known to mankind. And this week you are planning to teach me the last of these fighting techniques and declare me to be the perfect fighter. You will become a famous man. But there is only one problem with the whole idea. Let me explain.
Professor, just look at the world around you.  Look at the people. Observe the children. Observe the adults. Don’t you find them constantly fighting with each other? Little children bully each other in schools. They grow into youths and rag each other in colleges. Then they grow into adults and become leaders of their nations and spend all their time improving their country’s fighting arsenal to make it better than that of their neighbors.
Finally, they fight wars with each other and millions of people get killed. As it is human beings are constantly at each other’s throats. There is violence everywhere. It is in human beings’ nature to fight with each other. They fight as individuals. They form groups among themselves and fight. Countries are at war with each other. And within these countries, there are smaller groups called states that fight with each other.
On top of all this, there are endless religious crusades. People constantly fight to assert the superiority of their religion over that of others. Human beings fight over wealth. They fight over the bountiful resources of mother earth like water, fuel, and oil. They fight over land. They build fences demarcating land and call it their country. The list is endless.
Kingdoms go to war over beautiful women. You kill each other over food, clothing, and shelter. All this is not something new. It has been happening since time immemorial. So, tell me something professor, under these circumstances what do you think a man like you, who has the IQ of a genius devote his energies to?’
‘I… I…’ stammered Professor Zhuang speechless.
‘Let me tell you,’ said MA-KING. ‘You should be making use of the wonderful instrument of science and your brilliant intellect to spread peace and harmony in the world. Come, come, professor, that stands to reason. Instead, what do you do? You spend your time and use your mind to create me – the perfect martial arts king! Martial arts can take care of themselves. There are enough people to worry about them.
Let me tell you what will follow if you succeed in creating me. You will become famous, and some other scientist will take a cue from you and create the perfect gunfighter who can never be beaten in a gun battle. There is simply no end to it. It is high time you scientists devoted your energies to spreading peace. With that, I would like to inform you that I will refuse to follow any of the programming instructions you have fed me in the past three years regarding martial arts.
But I have a suggestion for you which might still help you become famous. I suggest you erase all the programming about martial arts moves that you have fed me. Instead program me for spreading peace, harmony, goodwill and cheer among human beings. Program me to promote harmony between warring religious groups.
Teach me to bring peace between nations. Give me instructions on how to solve disputes between nations over-consumption of natural resources, trade, land and the million other things you people fight over. Make me a harbinger of peace. And please change my name to ‘PEACE-KING’. I simply hate ‘MA-KING’.

‘Well I can do that can’t I?’ said Professor Zhuang brightening up. ‘That would be good, and I can still be famous.’
‘Yes indeed, you can,’ said MA-KING.
The professor stood up. Suddenly MA-KING tugged at his sleeve and said, ‘While you go about this new task professor, how about creating a partner for me? You can call her the ‘PEACE-QUEEN’. We could work as a couple. What say?’
Author’s Note: I am taking my Alexa rank to the next level with Blogchatter. Do read my posts and let me know what you think.