Skip to content
Short Stories
The Long Arm of Revenge 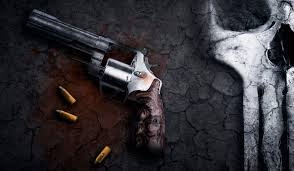 Fred and Luther sat in the back of the closed van which carried the trunk-full of cash to be dispensed at automatic teller machines all over the city. They were just three kilometers away from the bridge that led to the city gates. Fred blew a puff of smoke from his cigarette and said, ‘This van is too small for us. Three’s a crowd. Two people are enough for this job. After all, it is broad daylight.’
Patrick the driver of the van spoke from his seat in the front, through a partition. ‘You never know, Fred. Too many armed robberies these days. It is only safe to have two guards and a driver.’
‘I am equal to two men. I can take care of myself,’ said Fred. ‘I am a handful with a gun.’
Patrick shrugged his shoulders and said, ‘You know, Fred, bankers are a touchy lot and are fond of their money. And these days you can never tell when some gun-toting smart-ass kid might go wild and decide to get rich quick.’
Luther, a German and the youngest of them all asked, ‘Ever seen any action, you two?’
‘I was doing duty for the good old bank in Pennsylvania three years back,’ Fred said. ‘Van I was guarding got waylaid by three punks with masks on their faces. One of them was a girl. Shot one kid clean through the head. Other kid and girl escaped in a getaway car.  Police could never find them. They had no record.’
‘I have been in a skirmish or two when I was young but never in the line of duty for the good old bank,’ Patrick piped in.
Luther said with some feeling, ‘This is my first job as a guard. I have not killed anyone till now. I don’t want to either.’
‘You are still a young boy and you are soft,’ said Fred with a grin. ‘Once you have been on the job for twenty years you will grow into a hard-boiled son of a bitch like me. Your time for action will come. By the way, how is Lucy?’
‘Giving me hell about getting hitched together,’ said Luther with a grin. ‘I keep telling her I am trying to save money for it and will marry her soon.’
‘As long as she shares her bed with you, it is fine, isn’t it, Luther?’ chuckled Patrick from the front.
‘Listen kid, marry her when you can before you lose her,’ said Fred sagely. ‘You will never make a pile from this job unless you loot one of these vans we guard.’
‘That is an idea,’ grinned Luther.
Soon they were on the outskirts of the city and were about to cross the bridge over the river. Suddenly at a distance, they could see a young woman standing in the middle of the road waving her hands wildly and gesturing frantically to them. As they came closer they could see her clothes were torn and her hair a total mess.
When they were within a hundred feet of the girl, Luther exclaimed, ‘Oh my God! That is Lucy. Patrick, stop the van.’
It was strictly against regulations to stop the van anywhere except at teller machines. But the sight of Lucy’s frantic face forced Patrick to bring the van to a screeching halt. Fred and Luther got out of the van. Patrick had orders never to leave the driver’s seat. Lucy came limping into Luther’s arms. Her face was bruised all over. She looked like she had been beaten black and blue.
‘Oh! Luther, I have been raped and beaten up by that scum,’ sobbed Lucy. ‘And he looked so fatherly and nice.’
‘Tell us what happened, girl,’ said Luther looking startled.
‘I tried to hitch a ride from Denver yesterday. Remember I had told you I was going there to meet Penny. I missed the bus back to the city and tried to hitch a ride. An elderly man old enough to be my father picked me up.  And, and…’ faltered Lucy.
‘The first thing to do is to get to the city, call an ambulance and get you to a hospital. We can’t wait here with this van. Get into the front with Patrick, Lucy,’ said Fred and turned to get back into the van.
As soon as Fred had his back to him, Luther pulled out his revolver from the holster and shot Fred right through the head. Lucy reached into her torn blouse, pulled out an automatic and fired at Patrick who slumped forward in the driver’s seat.
Luther walked over to Fred’s body and kicked him in the ribs. ‘So high and mighty aren’t you. That is for my brother you killed in Pennsylvania.’
Lucy and Luther threw their bodies into the river. Luther got into the driver’s seat with Lucy by his side, turned the van around and drove away in the opposite direction.

Author’s Note: I am taking my Alexa rank to the next level with Blogchatter. Do read my posts and let me know what you think.
Tags: #MyFriendAlexa #JaiSWrites
Note: I am participating in the #SuperBloggerAcademy linky party by Healthwealthbridge Dr. Amrita and allaboutthewoman Dr. Bushra
JaiSeptember 21, 2018May 9, 2019

One Thought to “The Long Arm of Revenge”