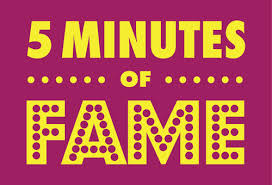 ‘Can I appear on television just once?’ I asked Mom.
‘No dear, you are too young for the camera,’ said Mom.
I made a face and said, ‘Well, I don’t see why I can’t. Aren’t they interested in
children at all?’
Mom sighed and said, ‘We allow only experienced people to participate in television programs. And the council may not agree.’
‘Just for a few minutes,’ I said looking at Mom imploringly.
‘All right, I will talk to the chairman. He may agree. It may be good publicity after all,’ said Mom.
That evening Mom came back and gave me the good news.
‘You can appear on television just for a few minutes,’ said Mom.
The next day the anchor of the scientific news program of the discovery channel reported excitedly on television, ‘The young one of the most recent product of evolution, the species Homo Intellectualis believed to be an off-shoot of our own Homo Sapiens was spotted for a brief five-minute period in Hawaii where the species is supposed to have evolved a few years back. Scientists have always maintained that this species is almost indistinguishable from Homo Sapiens. Professor Edward Derwin the expert on human evolution mentioned that this is the first time they have ever managed to capture on camera the young one of the Homo Intellectualis. The sighting of the young one has caused a lot of excitement in the scientific circles.’
I looked up at mom and grinned happily. I had gotten my five minutes of fame after all.


Author’s Note: I am taking my Alexa rank to the next level with Blogchatter. Do read my posts and let me know what you think.
Tags: #MyFriendAlexa #JaiSWrites
Note: I am participating in the #SuperBloggerAcademy linky party by Healthwealthbridge Dr. Amrita and allaboutthewoman Dr. Bushra
JaiSeptember 24, 2018May 9, 2019 One Thought to “Five Minutes of Fame”