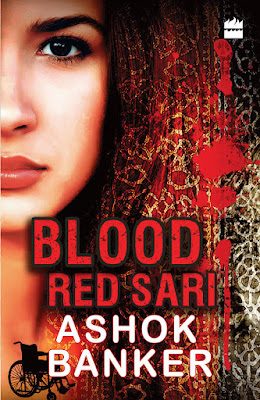 When I was searching for books to read in the library last week, I happened to come across this book with the title ‘Blood Red Sari’ written by Ashok Banker. The name Ashok Banker sounded vaguely familiar and I pulled the book out of the shelf and read the blurb. The book definitely sounded very promising as the blurb informed me that all the three protagonists were independent single women with strong characters and one of them was a lesbian. Being a vocal feminist and a strong supporter of gay rights I got the book issued along with two other books.
It was four days later that I began reading it. The book started off on a promising note with an interesting prologue and progressed smoothly. The first few chapters definitely livened up my mood. The story revolves around documents in a yellow envelope that have been dispatched to each one of the three protagonists by a murdered social activist just before her death.
The first few chapters introduce us to the protagonists who are definitely very interesting people. There is Anita who had grown up with the murdered woman and was also her lover during their formative years. Anita had been abused severely by her brothers (read raped) with the active encouragement of her mother when they find out she is a lesbian.
And then there is Sheila the second member of the trio who has faced a lot of abuse from men and has now broken all shackles and is a successful business woman. She runs a chain of Gyms across the country. The third person who receives the yellow envelope with the documents is Nachiketa who has successfully fought off an abusive husband and in-laws but is bound to a wheel chair as a consequence.
With such a promising trio of women as protagonists, a talented author would have definitely produced a real masterpiece. But unfortunately Ashok Banker fails to achieve any depth in the book at all. All the three women spend their time fighting and running away from gangsters and trying to understand the meaning of the data in the documents contained in the envelope.
The plot fails to develop at all. The book proceeds in instalments of three chapters, alternating between the run-ins of Anita, Sheila and Nachiketa with the hoodlums from the government, blonde haired gun-toting Germans and villains of several other hues. The way the author goes on about it, one gets the impression that suddenly the whole world has taken it upon itself to get rid of these three women and destroy the yellow envelopes as if their lives depended on it. There is absolutely no one in the world the women can turn to.
Anita has her share of adventures in the Trivandrum zoo where she also has a small brush with Hippos in their enclosure. Sheila is based in Kolkata and her action and adventures are based there. The wheel-chair bound Nachiketa is based in the Delhi-Noida area and finds an aid in the form of a Sardarji with the name Rajendra Powar who makes it his life’s ambition to help her. I guess this was a necessity as Nachiketa is bound to a wheel chair.
These three women do get in touch with each other over phone. There is some sex included towards the end. Right up to the end the author does not give us any clue as to where the story is headed. We are given some idiotic long-winded explanation for the importance of the documents in the envelope right at the end. This book has a continuation too. But even then, one whole book devoted to women running here and there with no plot development is too much to digest.
Well I really do not know what Banker was thinking of to write something like this. Well, is there something positive I can say about this book? Well, the characterisation is definitely not bad. The protagonists are powerful women and the book does move at a rapid pace. Only trouble is it heads nowhere and we are left wondering what the point of the book was.
I am going with a 2/5 for Ashok Banker’s ‘Blood Red Sari’. Pick it up if you like abstract books that do not have clear form. I will have have to think long and deep and decide if I am indeed interested in picking up the second book of this series.
JaiJune 28, 2018May 9, 2019