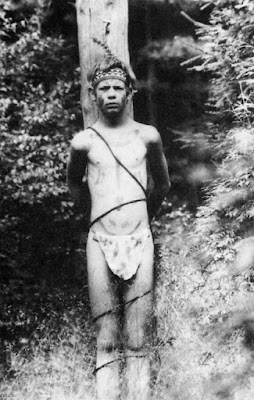 Mat drove steadily along the mountain road. He was deliberately driving slowly. He was now in his elements. He understood his enemy. He was once again the young flight commandant who had fearlessly shot down enemy planes in the sky. It was only the unknown that was frightening. Mat knew his enemy now. He thought of the best plan of approach.
He would have to be stealthy. The enemy knew he knew and would be coming for him. In forty minutes Mat was in the village. He parked his car on the main road. He walked through several by-lanes. The dim streetlights made everything look eerie. He walked steadily with a light tread. Suddenly he was in darkness as he left the by-lanes behind. He remembered the last time he had taken this path.
After walking for ten minutes he came to a clearing and in the dim moonlight he could make out something or someone tied up at a distance. He had no choice but to switch on his flashlight. He pointed it towards the tied up person and drew in his breath sharply. “Hello Air Commodore Mathew Williams,” said the fiddler’s voice suddenly. It came from inside the fiddler’s shack which lit up all of a sudden to illuminate the place. The fiddler said, “Come in Commodore and make yourself at home. I was expecting you. I must say you are persistent.”
Mat looked at the figure the light from his flashlight fell on. It was the young boy who always accompanied the fiddler. He was neatly tied to a pole. The boy was almost completely naked except for a loose loincloth around his hips. “Oh, relax commodore, there is nothing strange about the boy. He is just Terrence and he was anyway meant for my last experiment,” said the fiddler’s voice.

Mat approached the fiddler’s shack and entered slowly. The fiddler was seated in his usual chair. He pointed to the chair opposite him. Mat sat down and looked at the fiddler. He was suddenly awash with a contemptuous pity at the site of the old man.
<< PreviousNext >>

Author’s Note: This is a work of fiction. Names, characters, businesses, places, events, locales, and incidents are either the products of the author’s imagination or used in a fictitious manner. Any resemblance to actual persons, living or dead, or actual events is purely coincidental.
JaiApril 23, 2018May 9, 2019