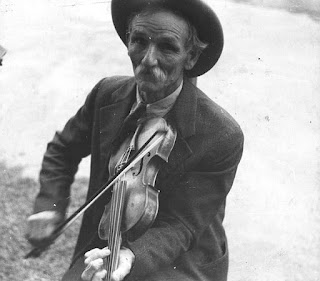 Mat knew the person the villagers called the fiddler. He was an old man in his seventies who was queer in the head and had bouts of insane rages. During these moments of insanity, he would stand in the village road and shout on top of his voice about the arrival of doomsday. He was always telling people how Lord Vishnu was just about to arrive in his final avatar; the Kalki, and put an end to this sinful world. It was his decided opinion that humanity had degenerated to a point of no return and the time had come for the Lord to take his final avatar.

At other times he seemed to have a remarkable amount of control over himself. During such sane moments, he could be seen sitting sagely by the side of some by-lane or the other, playing the fiddle. He would often be accompanied by a small boy of seven or eight. Nobody had any idea who the boy was. In addition, this quaint couple would most often be accompanied by some stray cat. Cats seemed to take to the fiddler in a big way and it was often said that the fiddler spoke to the cats and they could understand him perfectly.

Mat had realized why the cat he had seen last night had appeared familiar. He had often seen the cat with the fiddler before. The tunes the fiddler played were always sad ones no one had ever heard before. Mat would often pass by the fiddler when he went to the village to buy groceries for his house and he would always put some money into the fiddler’s hands. He also made it a point to wish the fiddler every time he passed him. The fiddler would never show any gratitude and would simply make a grumpy face.

But Mat never minded. The fiddler was often shooed away by the village people whenever he or the boy accompanying him ventured too near them. Mat had once taken the fiddler and his entourage to a cheap restaurant nearby to feed them, but the staff at the restaurant had refused to let them enter in spite of Mat’s earnest appeal. Finally, Mat had gotten the food parceled and handed it over to the fiddler. The fiddler had looked at Mat slyly and said, “Will you share it with me in my shack?” Mat was taken aback but had acquiesced and they had had a small meal in the fiddler’s old shack.

Mat had just picked at his food, for the shack was extremely foul smelling and killed any appetite he had. It was dirty with rags strewn about here and there. Mat had been polite so as to not offend the old man’s sensibilities and had been happy when the meal was over and he could finally let himself out into God’s good air. Mat never attempted to buy the fiddler any food again for fear of having to share it with him in his shack. But he always tipped the fiddler generously.

At one point Vikram had spoken to Mat about his generosity towards the fiddler. He had said in no uncertain terms, “Don’t waste your time with these stragglers, Mat. Most of them are thieving rogues up to no good. You might have trouble with this fellow later. I have seen many such chaps before.” Mat had politely changed the subject since he was a kind man and was surprised by Vikram’s harsh attitude towards an old man who was probably half mad and needed to be in an old age home. Being a policeman probably made Vikram more cynical than others, Mat had thought.

At 3 PM Mat rang Shivani at the hospital and asked her about Karen. Shivani tried to speak reassuringly, but Mat could make out the worry in her voice. “Her temperature has fallen down a bit more Dada,” she said, “Her breathing is perfectly normal. They are feeding her through tubes now and she is on drips. I have asked my maid-servant to pack all my stuff and hers too and come over and join me at the hospital. I will stay here as long as it takes. You do what you have to do.”

Next, he rang up Vikram and asked for the details of the blood test and the ball shaped like an apple. Vikram reported that there was nothing strange about the ball. It was made of cork and had been shaped to look like an apple. And the blood was not human according to the lab assistants but they could give no further details. Mat hung up and looked at his watch, It was 3.15 PM. Still, seven hours to go before his appointment with the fiddler. Mat was tempted to jump into his car and rush to the fiddler’s shack immediately and find out everything. But he realized that he had to play by the rules in this game and any false moves by him could harm Karen.

At 9 PM he went to the bedroom and dressed in rough woolen baggy trousers, a shirt, and a blazer. He went to his dressing table, pulled open the bottom most drawer and picked up his .38 caliber Smith and Wesson revolver, checked to see if it was loaded and put it inside the left pocket of his trousers. He took out his flashlight and put it in his right pocket. He tied a muffler around his face to cover his ears. Something told him this was not a problem that could be solved with guns and bullets. He was only too aware of the fact that he may be up against something that was in the realms of the supernatural and beyond his understanding, at least for the moment.

Finally, he did something he had not done since he was a teenager. Though Mat had Christian leanings, he was not a habitual churchgoer. But now he felt the need to pray. He was feeling helpless and realized that only Jesus could show him the way. He went to his dead wife’s room where there was a big portrait of Jesus Christ hanging on the wall, knelt before it and prayed for five minutes. He then picked up the chain with the cross that Mary always used to wear around her neck from his dressing table and put it around his neck. He locked his front door and went to his garage got into the driver’s seat of his car and started the engine.

Author’s Note: This is a work of fiction. Names, characters, businesses, places, events, locales, and incidents are either the products of the author’s imagination or used in a fictitious manner. Any resemblance to actual persons, living or dead, or actual events is purely coincidental.
JaiApril 6, 2018May 1, 2019