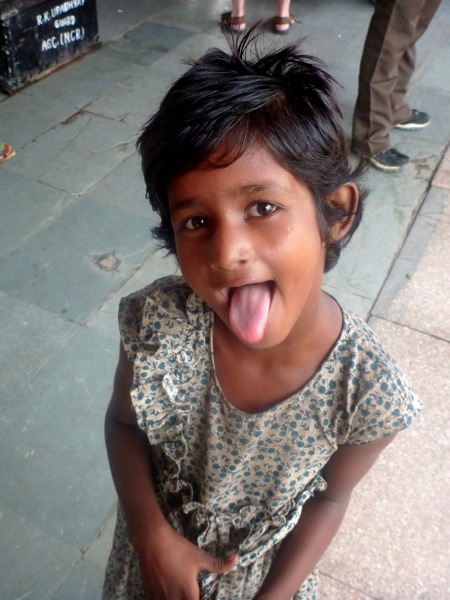 She could not have been more than seven or eight,
she was clad in a pink salwar and a white top,
dutifully following her entourage along,
faithfully raising her little hand to strangers for something to eat.
I was hurrying past her to begin my morning walk,
she quickly stuffed a piece of bun into her mouth,
lest I should think she was already over-fed,
and looked up at me hoping for a crumb to eat.
The smile on her face, dazzling  and captivating,
she stretched out her arm, looking up at me,
“ayya, give a poor child something to eat, ayya,” she said,
I hurried past her lest I am late for my morning walk.
After walking for a furlong more,
in a hurry to begin my regular rounds,
of the glorious Ramakrishna Math in Mylapore,
I am suddenly struck by a thought.
The little one that I had just left behind,
could not have been more than three or four years younger,
than my own little princess at Kochi,
of whom I think everyday during my little holiday.
I think of the hope in her deep eyes,
as she had looked up at me,
her glorious smile trying to entice me,
into parting with a morsel of food.
And me at my callous best,
had ignored the cries of her empty stomach,
the pathetic sobs of her stricken soul,
which she had overcome to smile at me.
I think of turning around,
running back and perhaps finding her again,
to take her to a decent eatery,
and feed her a sumptuous meal.
But already it has been ten minutes,
since I had left her behind enveloped in pangs of hunger,
I doubt if I would find her in the myriad lanes of Mylapore,
crowded with a multitude of men and women.
I know I have lost the little one once and perhaps forever,
fate had thrown a wonderful chance at me,
I hope it would be kind enough to give me one more opportunity,
and make our paths entwine in the numerous lanes of destiny.
JaiFebruary 11, 2018September 5, 2019 One Thought to “The Beggar Child…”