Skip to content
Miscellaneous
For Success In Life Should We Use The Head Or The Heart? 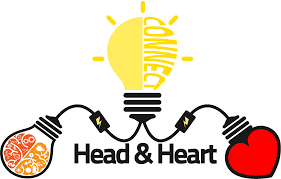 I am impelled to write this article because of an exchange I had with my little one a few days back. I was lying down on my bed and reading a book when she came up to my side and snatched away my book and looked down at me with a grin on her face. I looked at her with some annoyance and said “Well, what is it?”. She grinned at me and pointed to my chest and said “Daddy ! Your chest is here, where is your heart?”. I looked at her in some irritation and said “Well, you tell me where it is. You studied the circulatory system last year,”.

She pointed to the left side of my chest and said “It is there,”. Intrigued by what had prompted all this I asked her “Where is yours then?”. She told me she had two hearts one on the left and the other on the right side of her chest. Perplexed, I asked her “How is that?”. She replied “Daddy, one heart is for loving people and the other is for committing mischief,”. I burst out laughing and she ran away to continue her preparation for her Science test.

When my little one was very young she once asked me the question “Where is god?”. I told her he lives high up in the clouds and he watches over all of us and takes care of us. Then she asked me, if that were the case why don’t we see god when we travel in planes. I was at a loss to know what to say to that, but after some thinking I told her “We can’t see him but he can always see us wherever we are and he takes care of us,”. Personally I do not have any definite opinion on the existence of God and I prefer to call myself an agnostic with some leaning towards atheism. But I would definitely prefer to allow my daughter to grow up and form her own opinion about religion, philosophy and god. For the time being answers of this nature will suffice.

All this talk of god brings back memories of my own childhood and my own innocent beliefs when I was a kid. On the day of Krishna Jayanthi my mother used to make designs of small feet leading from our front door right up to the puja room. She told me and my sister that those feet belonged to Lord Krishna and he would follow those steps when he comes to our house in the night and visits the puja room. She used to make some delicacies like sweet appam dipped in cheese and we used to gorge ourselves on them after she had offered them to the deities. During all those years I sincerely used to believe that Lord Krishna indeed visited our house in the night.

My niece and nephew used to believe for quiet some years that Santa Clause really did bring presents for children on Christmas eve and placed them under the Christmas tree. Children see the world just as it is.  They have the innocence to assume everything that they see and discern is true and the world is a very genuine place where there is no room for fraud, trickery and skulduggery. In fact, at that age, a child does not even know the meanings of these words. Slowly we start growing up and learning the true nature of the world. We lose that wonderful innocence that can take pleasure in appreciating a bouncing ball, a beautiful crescent shaped moon and things like the mythology we read in Amar Chitra Katha or the Christian fairy tales.

In a more serious vein, this little exchange with my daughter about having two hearts made me think a little about whether we should follow our heart’s diktats or use the logical reasoning of the head to be successful in life. We are often told that the people who are the most successful in life are the ones who act by facts and logic, putting their emotions aside. And I guess that reasoning is correct to a very great extent. Most successful professionals like business managers, CEO’s, scientists, bankers and people in almost every walk of life are those who think and act by logic and make decisions based on pure facts.

But let us move a step ahead of this reasoning and ask us the question: why do we need to act by logic? The answer is again to achieve what the heart desires. Maybe we set aside our immediate emotions like anger, recklessness, over enthusiasm and act by pure reason and logic to achieve a certain goal. But ultimately the achievement of that goal is only in order to satisfy our heart’s desires.

Let us take the case of a CEO of a multi-national company who oversees the everyday activities of a large corporation. He makes his decisions by pure logic and sound reasoning. Every decision he makes for earning revenue for the company is based on cold hard facts. Why? He has to keep the share holders happy for one thing. He has to show results to the board of directors for another. But ultimately he is doing whatever he is doing only for his own personal betterment.

If his decisions prove right and he is able to lead the company along the path of growth and prosperity his salary increases, he is able to get job satisfaction and he is able to attain a number of other things that his heart desires. So no matter how you look at it human beings ultimately do things only to satisfy themselves.

Even great freedom fighters and revolutionaries who go through immense hardship to achieve something, do so because they get some moral satisfaction out of it. Yes, in this case they do a lot of good to the world and people too. I am not denying they have a great heart and are really men of great character. All I am pointing out is even people who sacrifice their lives for a certain moral principle or conviction do so because they get satisfaction at a higher intellectual and moral plane.

All this is fine but sometimes we have to allow our hearts to take over completely and chase our dreams even if they appear foolish and illogical. Every time mankind has taken a giant leap it has happened only because someone had defied logic, dared to be unreasonable and chased his dream . If Edmund Hillary and Sherpa Tensing had allowed logic to rule over their heart’s desire of conquering Mount Everest and decided it is impossible, they would not be remembered today.

If the Wright brothers had felt that no one had ever flown like a bird and that it is logically impossible as human beings do not have wings, I would not be travelling from Kochi to Chennai in an hour nor would any of you, my readers, be globe trotting. To be successful one has to be logical and make decisions with one’s head but to be really great one has to chase the heart’s desire however illogical or unreasonable it may appear to be. So never shy away from chasing the impossible. Have a heart !

3 Thoughts to “For Success In Life Should We Use The Head Or The Heart?”