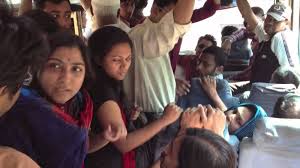 Human beings have both good and bad qualities. But are there good and bad qualities that singularly characterize nations? I mean stuff like; the Poles and Irish are dumb, Spaniards are cruel, Indians have a poor sense of humor, the Japanese are brilliant, the English are highly disciplined and so on. My personal belief is that for most part, these are myths built by nations over centuries.

Be that as it may; I ask myself the question, what is the one quality in my countrymen that irritates me the most? Of course, as a people we have a lot of positives. We are extremely hospitable, kind and unlike the west we take care of our parents in old age. We maintain unity in diversity. These are the few things that come to the mind immediately.

Talking of irritating qualities, the one that immediately springs to my mind is the male chauvinism that is an enduring characteristic of most Indian males. As a nation we are a great bunch of hypocrites. We pray to goddesses.  And after prayers in the temple we come home and ill treat our wives. Well, I am not going to discuss male chauvinism in detail here but I am going to confine myself to that one habit of Indians which I encounter most often and which makes me really mad.

The incident I am about to relate took place some 7 or 8 years back when I was travelling with my wife in a state transport bus in Coimbatore. The bus was crowded and there was no place to sit. Several rows of seats were marked as ladies seats but men were seated in most of them. Most of these men were looking like hoodlums. My wife was not feeling very well that day and I politely requested one of the men seated in a ladies seat to allow my wife to sit as she was unwell.

The man simply refused flatly. He was not even apologetic about it. He further added arrogantly that if women wanted equality they should be willing to face the hardships faced by men. Not wanting to start an argument as I knew all the other men would support this fellow, I told my wife to just bear the inconvenience for some time as the stop we had to get down would come within another 20 to 25 minutes.

After 5 minutes my wife whispered to me that she felt like vomiting. I made another attempt to get my wife seated and this time I asked a different man and was again refused. I lost my temper completely and caught the man’s wrist. The man sprang up and raised his hand threateningly. Well, I am not exactly a prize fighter and I am not built for brawls.  Fortunately it did not come to a free for all.

We were both held back by the other people in the bus. Soon the bus driver stopped the bus and one thing led to another and there were two groups of people in the bus arguing heatedly, one taking our side and another speaking against us. My wife who is a very refined woman quietly told the conductor that we would like to get down and we got out of the crowded bus into God’s good air. The incident has left a deep hatred in me for men who refuse to give up seats meant for ladies to them.

I live in Kerala and every time I get into a bus I find that a majority of ladies seats are occupied by men. I usually take an auto-rickshaw to and from my office but when I do travel by bus I find that women are generally herded into the front and men would be sitting in most of the ladies seats.  The men simply do not have the decency to vacate ladies seats even for old women.

Are we men so lacking in sensibilities? Are we so unimaginative that we cannot understand the plight of women? Most of these women who travel by public transport are office going women. Just think for a minute about a typical day in their life. These women generally wake up very early in the morning, sometimes as early as 4.30 AM. They cook for the whole family, get the children ready for school, pack their lunches and see them off. Then they pack the husband’s lunch and see him off too.

After this, they hurriedly get ready themselves, stuff some breakfast into their mouths, pack their lunch and rush to the bus stop just in time to catch an over-crowded bus in which they never get  a seat to sit. They work hard through the day and again get into a crowded bus to return home. Then they have to cook dinner and attend to the children’s home work.

Taking this scenario into consideration can’t men be decent enough to allow women to sit in seats meant for them? The worst part of it is there is no point in appealing to the conductors of these buses. Most often they want to stear clear of trouble and will not make any effort to intervene in things.

A couple of times I have attempted to get men to vacate  ladies seats by requesting them when I saw old women standing. I am not denying that they do listen to my appeals and vacate the seat sometimes. But why wait till you are asked? Why not have the decency to vacate the seat yourself? The trouble is we are a patriarchal society and right from the time they are born, our male children are conditioned to think they are superior.

When I was a child I remember my grandma treating me and her other grandsons with special care at the expense of the granddaughters. She used to tell us “Ambalai Singhamda Nee” which is Tamil for “You are a male lion, grandson”.  Fortunately my parents are educated and made sure that such idiotic stereo-typing did not rub off on me.

I am happy to state that my father and mother never discriminated between me and my sister. Both of us were given the same care and love and our parents saw to it that both of us were educated properly. I am thankful to my parents for instilling a healthy respect for women in me.

2 Thoughts to “Ladies seats in buses: Are they really for ladies?”