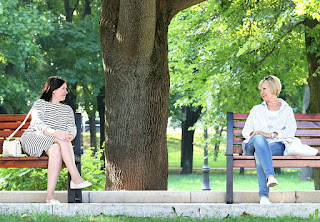 First of all let us consider the question of whether conversational skills are in-born or acquired. Like any other skill; the basic ability to carry out a conversation, at least to some degree, is in-born. If we have the basic innate skill, then we can learn to become engaging conversationalists. Some people are extremely quiet and introverted and simply do not open up at all. In other words, by nature, they are not inclined to talk. It is extremely difficult to make good conversationalists out of such people.

But if one has a modicum of ability to make good conversation, he or she can learn to become a great conversationalist.

Finally let us deal with how one can become a good conversationalist. If you want to strike a conversation with a perfect stranger in a train journey, what is the best way to do it? In the case of a train journey, I have often found that a simple question like “Which station are you getting down at,?” is enough to set the ball rolling. It is a safe and non-threatening question which most people are willing to answer. The importance of train conversations cannot be stressed enough. Friendships struck over train conversations have been known to lead to great business partnerships.

If you appear interested and involved in what the other person has to say, they in turn, will be interested in what you have to offer and it gives a general impetus to the conversation in the right direction.

In conversations it is important not to appear to be a nosy-parker. When we are talking with people, it is extremely important that we do not ask questions of a very personal nature until a certain degree of rapport has been established and we can also be reasonably certain that the other person is willing to and in fact wants to say something of a personal nature. Blundering on with questions of a personal nature before one is on comfortably friendly terms is a sure way to kill a conversation right at the outset.

In a conversation involving a number of people it is important to listen to everybody and pitch in with talk only at the right time. It is a cardinal sin to try and hog the limelight by talking too much at every turn. It is extremely important to listen to what each person has to say and to gather ideas from everyone. In such a conversation it is important to observe how ideas from different people are going down with the group as a whole.

While commenting on any issue or idea proposed by another member it is very important not to be offensive or crude. Your comments on other people’s ideas should be logical and constructive, be it criticism or praise. They should also be presented with clarity.

Other important aspects of the art of conversation are wit and humor. In a conversation the ability to crack a joke or reply wittily to some question goes a long way towards establishing good rapport. In group conversations like important business meetings, humor lightens the mood especially at times when tempers are frayed due to differences of opinion between the participants.

A charming wit and a propensity for humor are great tools for making good conversation. It is also important in a conversation not to ramble on endlessly and to speak clearly without getting over-emotional.