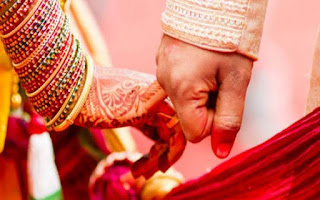 What is it that makes a marriage strong and successful? I am not a qualified marriage counselor; but having been successfully married to my soulmate for eleven years and still going strong, I felt it would not do any harm to share my opinions on this topic. Let us consider the prerequisites for an ideal marriage. Many of us strongly believe in the adage: “opposite poles attract”. But it is my firm personal opinion that marriages between like minded couples are more likely to succeed. Of course we come across several successful marriages between people who are diametrically opposite in nature. These include some celebrities like Kajol and Ajay Devgan.

Assuming my belief is true, we are faced with the question: can there ever be two totally like minded people in this world? It only takes a little bit of common sense to realize that such a thing is impossible. There are bound to be differences of opinion no matter how closely two people agree with each other on most topics and are kindred souls. This just means that ideal marriages where every thing is hunky-dory for ever is simply a mirage. An ideal marriage with hundred percent compatibility is impossible.

Let us now look at the factors that are important for maintaining an ideal relationship with one’s spouse. First thing to keep in mind is that a marriage is not a relationship of the blood, which means that filial affections do not have a role to play. It is a bond nurtured by give and take and physical relations. There are several times when spouses disagree on important matters. In many of these situations one person needs to curb his ego and let the other partner have his way even though he or she may be on the right side of the argument. This needs conscious effort. One should not think that curbing the ego and allowing one’s partner to have his or her way at such times is an affront to one’s dignity.

At the same time one should not allow his or her spouse to have their own way in every situation. This leads to complete domination by one member which is again detrimental to any relationship. Quiet often it pays to stand your ground and fight for what you think is right. But a certain amount of diplomacy in doing this is essential. The right way to handle this is to make your partner see the point behind your argument by coaxing, explaining and cajoling. This is much better than overruling your partner’s ideas on the topic completely and establishing your opinion by brute force arguments.

When do differences of opinion arise in a marriage? Sometimes it is a disagreement over children and their upbringing. Sometimes it is a misunderstanding over a platonic relationship one partner may be having with a colleague in the office. Sometimes it is over something as trivial as inviting the in-laws home for a week. There is no end to the number of ways in which disagreements may arise.

Let us consider the disagreements that pose real threats to the relationship as a whole.

Where it comes to children it is extremely important that both parents co-operate as far as possible. There has to be a balance in the way parents handle children. It is essential that children love their parents but at the same time have a certain fear mingled with respect towards them. The ideal way to accomplish this is for parents to follow a policy of give and take in matters pertaining to the upbringing of children. This in turn strengthens the marital bond. Ideally speaking, parents should agree to the roles they are going to play in the upbringing of a child. The ideal balance is for one parent to be a bit on the strict side while the other is lenient. This very often has to come about by conscious effort.

Then comes the most important aspect that goes into making a marriage successful; trust. Nagging, henpecking and jealous wives or equally jealous husbands have very often lead to the destruction of marriages that would have otherwise blossomed into wonderful, happy and strong relationships. There is nothing like hundred percent trust or no trust at all. There is always a degree to which one can trust one’s spouse. In this fast paced world, men and women have to maintain close relationships and work in close proximity with several members of the opposite sex. These could be colleagues in office, one’s secretary or boss. Some of these relationships develop into extra-marital affairs.

The key to avoiding this problem is for each partner in a marriage to draw certain conscious boundaries for themselves which they should not overstep. At the same time each partner should be adept at recognizing any signs of overstepping of the line by the other and handle it efficiently and correctly.

Throwing tantrums and resorting to shouting matches is not going to help. A heart to heart chat with one’s spouse, a long vacation or sometimes even re-locating the family to a different place keeps the marriage intact. If these do not solve the problem going to an experienced marriage counselor and getting help is the correct approach.

We have all heard of the saying: “familiarity breeds contempt”. In marriages husband and wife are in close proximity to each other day-in and day-out. They get to know each other very intimately. After the initial ecstatic days of a marriage there is every chance that we tire of our spouses as months and years pass by. So how do we keep our feelings towards the relationship on an even keel? Children of course help to keep the bond strong. There are other small things one can do. Regular vacations, going out regularly in the evenings as a family, surprising your spouse with an unexpected gift are some of the ways to keep the bond strong and fresh.

Last but not the least, sometimes one partner may need some space and time for himself or herself. So there is absolutely nothing wrong in leaving the family behind for a week or so and going on a vacation by oneself to rejuvenate. This is especially true of men and women who like a certain amount of solitude in their lives. In conclusion there is no cut and dried method for having a strong marriage. The secret is for each couple to evolve their own mechanism to keep their relationship strong and long lasting.