Skip to content
Daughter, Violin
The One Thing I Do Every Day 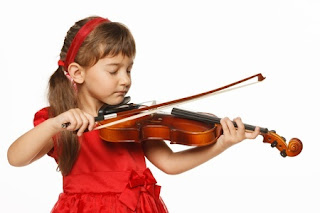 When I try to think of something I do everyday, several things spring to the mind immediately. There are of course the minor things that come to the mind at once like brushing my teeth as soon as I get up, going for a walk, bathing, to say nothing of the harrowing five minutes I spend at least once every day crossing the highway outside my apartment to drop my ten year old at her bus stop where her school bus picks her up.

But the one thing that I do everyday and which gives me immense pleasure is the forty five minutes I spend between 6.30 and 7.15  in the evening when I get to listen to my daughter practicing the violin. My daughter’s sojourn with the violin began five years back when she was in grade one. It all started when we heard that a music teacher visited a neighbor’s house regularly to teach their child the keyboard. Both my wife and I are great fans of western classical music. My wife immediately suggested: “Jai, we really ought to teach our daughter some musical instrument”.

I agreed and we called our little daughter and asked her what musical instrument she would like to learn. My daughter immediately gave a wide smile and raised her left hand as if she was holding something at shoulder level, moving her right hand back and forth. We could not imagine what instrument she was referring to. We realized immediately that she did not know the name of the instrument that had captured her imagination so vividly.

“You want to learn guitar?” I ventured wildly and she immediately replied “No Daddy”.

It was my wife who hit the nail on the head.

The next day we went to the neighbor’s house along with my daughter and approached the music teacher. He was a gentle grey haired man in his sixties whose name was Joy Nellickal and who was an expert in playing three instruments. He could play the guitar, the violin and the keyboard.

He had been teaching musical instruments to children for a long time. We told him we were interested in engaging him to teach our daughter violin. He looked at my daughter and said gently “Why not keyboard? It is easier to learn.”.

My daughter shook her head emphatically and said “No, I want to learn the violin only”.

The teacher said “Well, the violin is a difficult instrument to learn and you will have to put in a lot of effort.”

“Yes, I will” promised my daughter solemnly.

And so it was arranged. The violin teacher started teaching my daughter from the next week onward. In those early days when my daughter was taking baby steps with the violin, I remember it was very difficult for her. We got her a small violin and after the initial natural enthusiasm of a child for a new toy she began to have doubts.

My wife and I had to put our foot down to get her to practice regularly. She often used to complain of aching fingers. We used to tell her that once she got used to playing regularly the aches and pains would disappear. There were days when she would try to dodge her practice. But we persisted and slowly by fits and starts she grew to love the violin.

The aches and burns in her fingers disappeared and she began improving. Now, after five years, she has developed a great love for the violin and she is loathe to miss practice for even a day.

The violin teacher is a task master and contributed a lot towards making my daughter love the violin. My daughter set up regular practice hours for herself between 6.30 and 7.15 PM to which she has been sticking assiduously. She began with simple lessons and slowly she improved and moved towards becoming a good violinist.

I would return from office after a tiring day and over a cup of coffee listen to her practicing the violin. The melodious tunes emanating from her violin strings would re-vitalize and rejuvenate my tired mind. For those 30 to 45 minutes, the melody would transport me to a magical world of joy and happiness. The habit has grown on me and the day I don’t get to hear her playing the violin I feel I have missed something really important,.

It has been five years since my daughter started learning the violin and she has become a competent little violinist for her age. She has performed a few times on stage. She has played songs like the theme song from the movie Titanic, the song Edelweiss from the movie the sound of music, the choir song silent night and other such songs on stage. To me the forty five minutes I listen to her practicing the violin are like manna from heaven.

After a hard day’s work, full of tension, the melodious tunes from her violin act like a tonic that energizes my tired mind. I hate the days I miss out on that.

3 Thoughts to “The One Thing I Do Every Day”